A quantum communications experiment was launched into low orbit around Earth from the International Space Station (ISS). A collaborative experiment of the University of Illinois Urbana-Champaign and the University of Waterloo, CAPSat (Cool Annealing Payload Satellite) contains single-photon detectors, which can be used as receivers for unhackable quantum communications.

Illinois Physics Professor Paul Kwiat, who was the founding director of the Illinois Quantum Information Science and Technology Center, is the primary investigator on the project. Kwiat has collaborated closely with Waterloo Professor of Physics and Astronomy Thomas Jennewein to design the experiment. Illinois Aerospace Engineering Professor Michael Lembeck led a team of students in the integration and test of CAPSat. Lembeck, who is the director of the Laboratory for Advanced Space Systems at Illinois (LASSI), will coordinate communications with the satellite through LASSI’s ground station in Urbana. First contact was made with the nanosatellite today at 2:52 p.m.

Quantum communication via a network of satellites will hinge on improving the performance and longevity of the in-orbit photodetectors used to detect the single-photon signals. Applications include quantum key distribution for ‘eavesdropper-proof’ transmission of secret data, quantum teleportation for transmission of quantum states, and quantum networking for distributed sensing and quantum computing “in the cloud.” 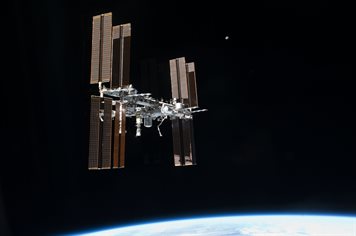 Transmitting quantum signals through free space is far more efficient than sending them through optical fibers, which have intolerable losses beyond a few hundred kilometers, but there is a massive tradeoff. In orbit, the ultrasensitive photodetectors are exposed to high levels of radiation in the form of protons, inflicting critical damage that increases the detector’s background noise and limits the detector’s useful lifespan.

To combat this, the detection system in CAPSat has built-in self-healing capabilities against the effects of radiation.

Kwiat notes, “Based on successful laboratory experiments performed on Earth by the Waterloo group —including at particle accelerators, which generate radiation similar to what CAPSat will endure—the photodetectors in CAPSat will test an optical annealing process, periodically heating up and cooling the detectors with a laser to reverse radiation damage.”

This is the first time such experiments will be performed in space. This huge leap for the nanosatellite was six years in the making. 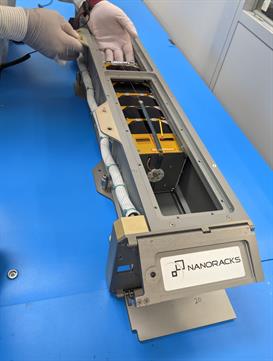 Lembeck describes this morning’s deployment of CAPSat from the ISS by a robotic arm holding a Nanoracks deployer: “The satellite is about the size of a loaf of bread, 10 cm X 10 cm X 30 cm. It was placed in another box, the deployer, that has a front door and a spring-loaded plate in the back. When the door opened, the plate pushed the satellite out the front door into space to begin its mission.”

One of the biggest challenges in designing CAPSat was fitting the quantum communications components into the tight dimensions of the satellite casing and to operate with low power consumption using energy from built-in solar panels. Inside CAPSat are four single-photon detectors, built at Waterloo. Waterloo Institute for Quantum Computing research associate Nigar Sultana, who has been working on the detector module for the CAPSat project since it kicked off six years ago, says “everything matters, even the small things like glue.”

Although small in size, CAPSat’s potential impact is huge because it might provide a very efficient method to mitigate radiation damage of single-photon detectors in orbit.

“The deployment of CAPSat demonstrates proof of concept that will pave the way for future quantum communication missions,” comments Jennewein.

Kwiat describes the experiment, “The detectors will measure light, counted in single photons, and it’s very important that there isn’t a lot of noise in these measurements. The detectors don’t have much noise initially, but over time, radiation in the form of protons damages the silicon of the detector, leading to spurious noise counts. So even in darkness, the detectors will—falsely—indicate recording light.”

“Two of the detectors have lasers pointed at them for annealing, and two don’t,” Kwiat continues. “Based on the noise levels we read, my colleagues at Waterloo and my team here will determine how often to apply optical annealing. The detectors’ noise levels are influenced by several factors—shielding, where the satellite is in space, where it is in orbit around planet, different levels of radiation, etc.—so we will monitor that and plan our tests accordingly.”

There is also an LED light source in CAPSat, to confirm the detectors are functioning to see light at all. The ultimate goal of the experiment will be to optimize the photodetector’s annealing procedure for future quantum communications satellites.

Much of the work on this project has been completed by undergraduate students. In fact, the satellite was delivered in early July to NASA’s launch service provider Nanoracks in Houston, by two Illinois undergraduate electrical engineering students who had helped assemble it. Rick Eason and Logan Power, under the direction of Lembeck, participated in CAPSat’s installation in the orbital deployer mechanism. Aerospace Engineering graduate student Eric Alpine shepherded the satellite through its early years of development.

Lembeck says, “Our LASSI lab has enjoyed working with such world class physicists as Paul Kwiat and Thomas Jennewein to attempt this exciting experiment in a small satellite form factor. We have looked forward to seeing CAPSat deployed from the ISS and meeting the team’s mission objectives.”

Kwiat says the project wouldn’t have been possible without the 40-plus years’ experience in flight missions provided by Lembeck, whose team assembled the satellite and designed its circuitry, addressing special environmental concerns like near-vacuum conditions.

Kwiat concludes, “There is currently a large drive around the world to develop quantum information processing capabilities, including quantum networks, in an effort that bridges the physical sciences, engineering, and computer sciences.

“The eventual development of a global quantum internet would enable several further advancements, ranging from the ability to do quantum computing in the cloud—accessing and programming queries on the network without ownership of a quantum computer—to the potential use of the network for distributed quantum sensing, such as a quantum telescope.”

CAPSat is one of three university-built nanosatellites that lifted off from NASA’s Kennedy Space Center in Florida on Saturday, August 28, aboard SpaceX’s 23rd Commercial Resupply Services mission to the International Space Station. Funding for CAPSat was provided by NASA’s Undergraduate Student Instrument Project and the Canadian Space Agency. This was the 37th Educational Launch of Nanosatellites (ELaNa) mission.