Trial demonstrates potential to reduce over 4,000 hours of labor a year

Fujitsu Limited and Nippon Yusen Kabushiki Kaisha (NYK), a major global shipping company, announced the introduction of Fujitsu’s quantum-inspired Digital Annealer technology to significantly streamline complex stowage planning for car carriers, leveraging the technology’s world-class combinatorial optimization capabilities. The Digital Annealer will play a role in automating aspects of the stowage planning process for NYK’s dedicated car carriers, an enormously complex task involving a vast number of possible stowage patterns depending on the number of vehicles loaded, models of vehicles, and the number of ports called along the shipping route. After successful initial tests, Fujitsu and NYK have launched a real-world operational trial of the technology on September 1st with an aim to commence full-scale operational use in April 2022.

In initial tests, NYK contributed its decades of industry experience to work with Fujitsu to develop a new algorithm for the Digital Annealer, which the partners leveraged to successfully reduce the time it takes to create a stowage plan for a dedicated car carrier from 6 hours to 2.5 hours per ship. The companies anticipate that this will result in a potential reduction of 4,000 working hours per year, allow for agile responses to sudden changes in plans, and prevent variations in stowage plan quality from person to person based on their relative experience and skill.

Moving forward, Fujitsu and NYK will continue working together to further improve the system by increasing processing speed and improving the accuracy of output results during trial operations. The two companies ultimately aim to contribute to the reduction of greenhouse gas emissions across the automobile shipping supply chain, improving the efficiency of cargo handling and ship operations to contribute to the realization of a more sustainable future.

NYK operates a global automobile shipping business that links Japan and other parts of the world—each ship in its fleet of car carriers holds more than several thousand vehicles. Cars are loaded one by one onto these car carriers at predetermined distance in accordance with a prepared stowage plan. When a car carrier with a maximum loading capacity of about 7,000 cars and 12 decks loads and unloads more than 60 types of cars of different heights and widths while calling at more than 10 ports, for instance, the number of possible patterns for loading and unloading can exceed 10 to the 2,000th power. Planners face many complexities and challenges when creating stowage plans that can satisfy conditions including how to load vehicles at a loading ratio close to the maximum capacity of the ship or how to secure enough space on the ship to safely load and unload the car carriers.

Traditionally, professional planners can only successfully create these plans after gaining considerable experience and mastering stowage patterns and arrangement methods to create stowage plans that fulfill these rigorous standards. Nevertheless, issues including individual differences in the quality of stowage plans due to the relative experience and skills of each planner, as well as significant increases in workload arising from alterations to stowage plans due to sudden changes in conditions, mean that it can take up to six hours to create a plan for just one vessel, posing an ongoing challenge to efforts to streamline the process.

In order to solve these problems, NYK has introduced Fujitsu’s Digital Annealer to help optimize its stowage planning. Fujitsu’s Digital Annealer is a computing architecture inspired by quantum phenomena, offering users the ability to rapidly solve complex combinatorial optimization problems at speeds significantly faster than general purpose computers and without the added complications and costs typically associated with quantum computing methods. With the introduction of the Digital Annealer, Fujitsu built a cloud-based system that automatically completes the work of planning the optimum stowage position of a vehicle that takes into account of various conditions, which is the most important task of creating a stowage plan. This is accomplished by drawing on information from NYK’s internal systems on the size of vehicles to be loaded and the port to be loaded, and using the Digital Annealer to solve the problem, a process that takes approximately 30 minutes.

In preliminary trials prior to the introduction of this system, Fujitsu and NYK were able to reduce the work required by experienced planners to create a loading plan from as much as six hours per vessel to about 2.5 hours.

The companies anticipate that this will enable planners to reduce their stowage planning time by 4,000 hours or more per year, resulting in a possible expansion of business opportunities arising from the speed of decision making, as well as significant effects such as enabling planners to more efficiently respond to sudden changes in plans and reducing the variability of stowage planning quality due to differences in planner experience. 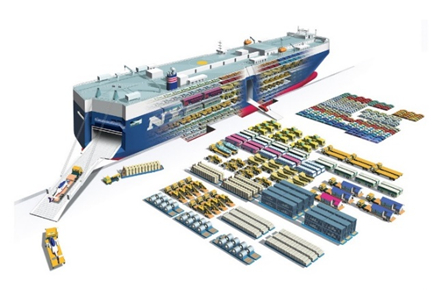 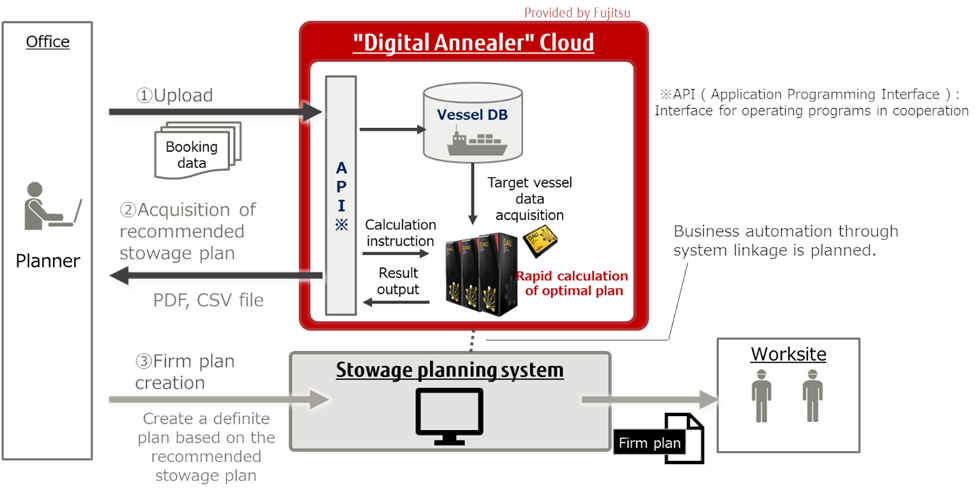 NYK is promoting the further improvement of highly safe navigation and efficiency through the digitization of ships, as well as the reduction of environmental impact in accordance with its concept of “Digitalization and Green”, in order to contribute to the achievement of the Sustainable Development Goals (SDGs). In the future, NYK aims to improve efficiencies in cargo handling operations by creating higher precision loading plans by deepening synergies between the newly developed system and its individual in-house systems.

Fujitsu will continue to play an active role in NYK’ s digitization efforts, delivering new value and the enhancement of competitiveness in all industries through Digital Annealer and the achievement of the SDGs for society as a whole.

The Battle for Post-Quantum Security Will be Won by Agility

The Shorts | 9/3/21 | Science and Research in Quantum Computing