A team of researchers has developed a way to significantly increase the memory of speckle patterns, the very complex patterns that result from shining a laser light onto an opaque sheet, such as paper, biological tissue, or fog.

The method, developed by researchers from Yale, Bilkent University, National Nanotechnology Research Center (UNAM), Vienna University of Technology, and the University of Southern California, has potential applications for such fields as biomedical imaging, optical metrology, and quantum information science. The results are published in Physical Review X. 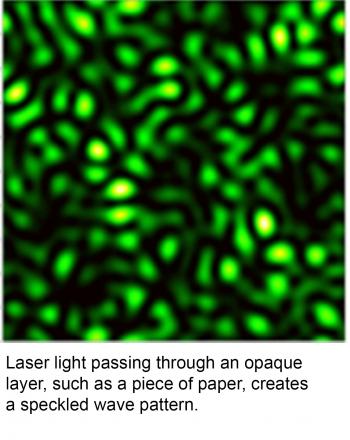 Speckle patterns can be compared to what happens when many drops of water fall on the surface of a puddle at the same time, resulting in a wave pattern that quickly becomes very complex. The speckle patterns created from light have a certain ‘memory,’ which researchers had previously used to develop a method for visualizing objects hidden behind an opaque layer. The method involves passing light through an opaque layer (such as a wall) to create a speckled light pattern behind the layer. Although it gives the impression of being completely random (see figure 1), the speckled pattern contains certain correlations, resulting in an “angular memory” – that is, tilting the incident laser beam on the opaque layer surface with a small angle yields the same transmitted speckle pattern but with an angular tilt (see figure 2). The direction and angle of this tilt behind the opaque layer are the same as the tilt direction and angle at the input.

With this new study, though, it is now possible that the speckle pattern formed on the back can be tilted in any desired direction, regardless of the tilt angle and direction of laser light on the opaque surface. The core ingredient of the new method is the “transmission matrix” of the opaque layer, which gives the relationship between the laser light on the opaque surface and the laser light passing behind it. Using the experimentally determined transmission matrix, laser light on the surface is spatially shaped using a device known as a spatial light modulator. This spatially shaped light customizes the angular memory effect, allowing the transmitted speckle to behave as desired. 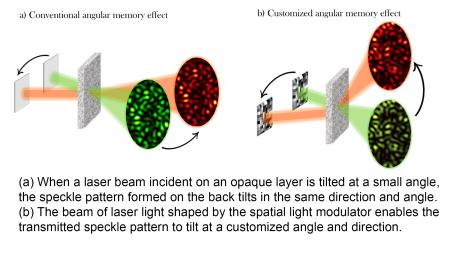 It was previously believed that the angular memory effect is a physical feature of the opaque material. By that thinking, the performance of the imaging methods using this memory effect would be limited by the physical properties of the material.

“In our study, though, we have shown that this view is much too pessimistic,” said the study’s lead author, Hasan Yilmaz, assistant professor at Bilkent University, UNAM. “The angular memory of the light waves passing through the opaque layer can be modified independently of the physical properties of the opaque material, by controlling the shape of the incident light.”

It’s a breakthrough that opens up new possibilities for the technology.

“Our method has the promising feature that it can also be used for different memory effects in other complex systems such as optical fibers and chaotic systems,” said the study’s senior author, Hui Cao, the John C. Malone Professor of Applied Physics, Professor of Physics, and Professor of Electrical Engineering.

Prof. Stefan Rotter from Vienna University of Technology in Austria noted that the results nicely demonstrate the power of spatially shaping light waves.

“Moreover, they also raise a multitude of follow-up questions, such as whether the memory effect in the transmitted output speckle pattern also has interesting consequences for the light fields inside the opaque medium,” he said.

Another application of the new method is in quantum information science. Previously, researchers demonstrated that the angular memory effect is present also for quantum light through scattering media. Using the new method, quantum angular correlations of entangled photons that are scattered through a complex medium can be customized. Such freedom of modifying quantum correlations will have applications in quantum imaging and metrology.

The Shorts | 7/28/21 | Technology and Hardware in Quantum Computing