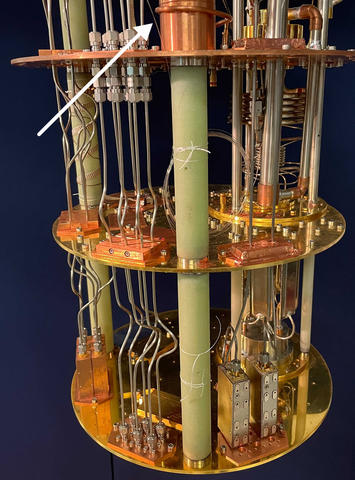 NIST physicists measured and controlled a superconducting quantum bit (qubit) using light-conducting fiber (indicated by white arrow) instead of metal electrical cables like the 14 shown here inside a cryostat. By using fiber, researchers could potentially pack a million qubits into a quantum computer rather than just a few thousand. Image Credit: F. Lecocq/NIST

The secret to building superconducting quantum computers with massive processing power may be an ordinary telecommunications technology — optical fiber.

Physicists at the National Institute of Standards and Technology (NIST) have measured and controlled a superconducting quantum bit (qubit) using light-conducting fiber instead of metal electrical wires, paving the way to packing a million qubits into a quantum computer rather than just a few thousand. The demonstration is described in the March 25 issue of Nature.

Superconducting circuits are a leading technology for making quantum computers because they are reliable and easily mass produced. But these circuits must operate at cryogenic temperatures, and schemes for wiring them to room-temperature electronics are complex and prone to overheating the qubits. A universal quantum computer, capable of solving any type of problem, is expected to need about 1 million qubits. Conventional cryostats — supercold dilution refrigerators — with metal wiring can only support thousands at the most.

Optical fiber, the backbone of telecommunications networks, has a glass or plastic core that can carry a high volume of light signals without conducting heat. But superconducting quantum computers use microwave pulses to store and process information. So the light needs to be converted precisely to microwaves.

To solve this problem, NIST researchers combined the fiber with a few other standard components that convert, convey and measure light at the level of single particles, or photons, which could then be easily converted into microwaves. The system worked as well as metal wiring and maintained the qubit’s fragile quantum states.

“I think this advance will have high impact because it combines two totally different technologies, photonics and superconducting qubits, to solve a very important problem,” NIST physicist John Teufel said. “Optical fiber can also carry far more data in a much smaller volume than conventional cable.”

Normally, researchers generate microwave pulses at room temperature and then deliver them through coaxial metal cables to cryogenically maintained superconducting qubits. The new NIST setup used an optical fiber instead of metal to guide light signals to cryogenic photodetectors that converted signals back to microwaves and delivered them to the qubit. For experimental comparison purposes, microwaves could be routed to the qubit through either the photonic link or a regular coaxial line.

The “transmon” qubit used in the fiber experiment was a device known as a Josephson junction embedded in a three-dimensional reservoir or cavity. This junction consists of two superconducting metals separated by an insulator. Under certain conditions an electrical current can cross the junction and may oscillate back and forth. By applying a certain microwave frequency, researchers can drive the qubit between low-energy and excited states (1 or 0 in digital computing). These states are based on the number of Cooper pairs — bound pairs of electrons with opposite properties — that have “tunneled” across the junction.

The NIST team conducted two types of experiments, using the photonic link to generate microwave pulses that either measured or controlled the quantum state of the qubit. The method is based on two relationships: The frequency at which microwaves naturally bounce back and forth in the cavity, called the resonance frequency, depends on the qubit state. And the frequency at which the qubit switches states depends on the number of photons in the cavity.

Researchers generally started the experiments with a microwave generator. To control the qubit’s quantum state, devices called electro-optic modulators converted microwaves to higher optical frequencies. These light signals streamed through optical fiber from room temperature to 4 kelvins (minus 269 C or minus 452 F) down to 20 millikelvins (thousandths of a kelvin), where they landed in high-speed semiconductor photodetectors, which converted the light signals back to microwaves that were then sent to the quantum circuit.

In these experiments, researchers sent signals to the qubit at its natural resonance frequency, to put it into the desired quantum state. The qubit oscillated between its ground and excited states when there was adequate laser power.

To measure the qubit’s state, researchers used an infrared laser to launch light at a specific power level through the modulators, fiber and photodetectors to measure the cavity’s resonance frequency.

Researchers first started the qubit oscillating, with the laser power suppressed, and then used the photonic link to send a weak microwave pulse to the cavity. The cavity frequency accurately indicated the qubit’s state 98% of the time, the same accuracy as obtained using the regular coaxial line.