Finding the Q-Spot: Ozzies Claim to Have Done So on the Road to Silicon Quantum Computing

Finding the Q-Spot: Ozzies Claim to Have Done So on the Road to Silicon Quantum Computing

Australian researchers have found the ideal position for qubits in silicon – a development that will help them to scale up atom-based quantum computers. 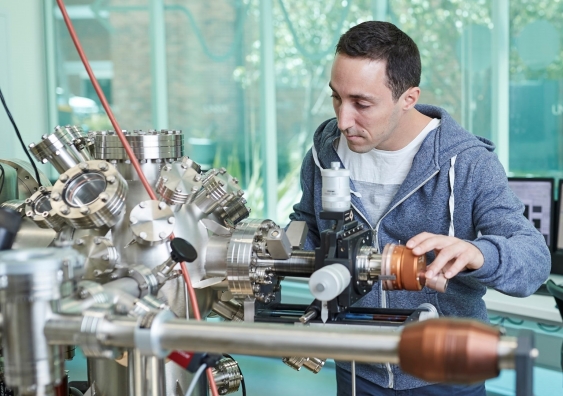 Researchers from the Centre of Excellence for Quantum Computation and Communication Technology (CQC2T) working with Silicon Quantum Computing (SQC) have located the ‘sweet spot’ for positioning qubits in silicon to scale up atom-based quantum processors.

Creating quantum bits, or qubits, by precisely placing phosphorus atoms in silicon – the method pioneered by CQC2T Director Professor Michelle Simmons – is a world-leading approach in the development of a silicon quantum computer.

In the team’s research, published today in Nature Communications, precision placement has proven to be essential for developing robust interactions – or coupling – between qubits.

“We’ve located the optimal position to create reproducible, strong and fast interactions between the qubits,” says Professor Sven Rogge, who led the research.

“We need these robust interactions to engineer a multi-qubit processor and, ultimately, a useful quantum computer.”

Two-qubit gates – the central building block of a quantum computer – use interactions between pairs of qubits to perform quantum operations. For atom qubits in silicon, previous research has suggested that for certain positions in the silicon crystal, interactions between the qubits contain an oscillatory component that could slow down the gate operations and make them difficult to control.

“For almost two decades, the potential oscillatory nature of the interactions has been predicted to be a challenge for scale-up,” Prof. Rogge says.

“Now, through novel measurements of the qubit interactions, we have developed a deep understanding of the nature of these oscillations and propose a strategy of precision placement to make the interaction between the qubits robust. This is a result that many believed was not possible.”

The researchers say they’ve now uncovered that exactly where you place the qubits is essential to creating strong and consistent interactions. This crucial insight has significant implications for the design of large-scale processors.

“Silicon is an anisotropic crystal, which means that the direction the atoms are placed in can significantly influence the interactions between them,” says Dr Benoit Voisin, lead author of the research.

“While we already knew about this anisotropy, no one had explored in detail how it could actually be used to mitigate the oscillating interaction strength.

“We found that there is a special angle, or sweet spot, within a particular plane of the silicon crystal where the interaction between the qubits is most resilient. Importantly, this sweet spot is achievable using existing scanning tunnelling microscope (STM) lithography techniques developed at UNSW.

“In the end, both the problem and its solution directly originate from crystal symmetries, so this is a nice twist.”

Using an STM, the team are able to map out the atoms’ wave function in 2D images and identify their exact spatial location in the silicon crystal – first demonstrated in 2014 with research published in Nature Materials and advanced in a 2016 Nature Nanotechnology paper.

In the latest research, the team used the same STM technique to observe atomic-scale details of the interactions between the coupled atom qubits.

“Using our quantum state imaging technique, we could observe for the first time both the anisotropy in the wavefunction and the interference effect directly in the plane – this was the starting point to understand how this problem plays out,” says Dr Voisin.

“We understood that we had to first work out the impact of each of these two ingredients separately, before looking at the full picture to solve the problem – this is how we could find this sweet spot, which is readily compatible with the atomic placement precision offered by our STM lithography technique.”

UNSW scientists at CQC2T are leading the world in the race to build atom-based quantum computers in silicon.  The researchers at CQC2T, and its related commercialisation company SQC, are the only team in the world that have the ability to see the exact position of their qubits in the solid state.

In 2019, the Simmons group reached a major milestone in their precision placement approach – with the team first building the fastest two-qubit gate in silicon by placing two atom qubits close together, and then controllably observing and measuring their spin states in real-time. The research was published in Nature.

Now, with the Rogge team’s latest advances, the researchers from CQC2T and SQC are positioned to use these interactions in larger scale systems for scalable processors.

“Being able to observe and precisely place atoms in our silicon chips continues to provide a competitive advantage for fabricating quantum computers in silicon,” says Prof. Simmons.

The combined Simmons, Rogge and Rahman teams are working with SQC to build the first useful, commercial quantum computer in silicon. Co-located with CQC2T on the UNSW Sydney campus, SQC’s goal is to build the highest quality, most stable quantum processor.