Fujitsu Laboratories Limited, in collaboration with the University of Toronto, has successfully developed a new parallel search technology to help achieve megabit-class performance for large-scale problems, representing an important technical milestone for its Digital Annealer. Fujitsu’s Digital Annealer is a unique computing architecture that rapidly solves combinatorial optimization problems too large and complex for conventional technologies.

The current, second-generation Digital Annealer Cloud Service, available to customers since May 2018, delivers performance at 8,192 bits to offer users a powerful tool for solving optimization problems in fields including logistics, finance, medicine, and manufacturing. As applications in a variety of industries continue to grow, however, a need continues to exist for a technology that can handle problems at an even larger scale in order to solve a broader range of complex, real-world problems.

With this challenge in mind, Fujitsu Laboratories has successfully demonstrated the world’s first practical solution on the scale of one megabit for an Ising machine(1) with its Digital Annealer, applying a new parallel search technology.

Fujitsu Laboratories aims to contribute to solving real-world problems by integrating this technology into its Digital Annealer, furthering expanding its ability to solve large-scale combinatorial optimization problems in a variety of fields.

With the acceleration of DX initiatives in the corporate world, users in many industries and disciplines increasingly face situations in which they need to quickly find the optimal solution among various combinations of factors in the real-world, including in manufacturing, logistics, disaster prevention, and new drug development.

In order to resolve these practical challenges, it has become necessary to solve combinatorial optimization problems on the scale of one megabit. This remains difficult owing to the fact that obtaining an effective solution in a limited time causes an exponential increase in computational complexity.

For instance, in the manufacturing field, large-scale optimization is needed to streamline production, including for scheduling complex manufacturing processes that differ from part to part across an entire plant, taking into account resources such as personnel and equipment, and delivery dates. In the logistics field, it is necessary to not only optimize distribution plans on a regional scale, but also to draw up large-scale plans covering the entire country.

Digital Annealer achieves high search performance by constructing a basic optimization module with a high degree of parallelism that repeatedly performs an update bit search to transition from a certain state to a more optimal state. In order to solve large-scale problems, Fujitsu Laboratories has developed an adaptive parallel search technology that performs multi-bit update in the early stage when a rapid energy drop is expected due to multi-bit update, and switches to single-bit update to increase the solution search accuracy in the converging stage.

Fujitsu Laboratories applied the new technology to solve the problem of determining the production schedule for a small batch of a wide variety of servers. To solve this problem, it’s necessary to consider complex constraints including work order, worker skill level, break times, and equipment availability. The number of bits in the problem is determined by the number of discrete tasks, the number of workers, the number of pieces of equipment, and the number of time slots, and is very large.

In this example, the test was conducted under the conditions of 100 tasks, 12 pieces of equipment, 13 workers, and 65 time slots, and the total number of bits was 1,014,000 bits. By applying the new technique to produce the solution, Fujitsu Laboratories successfully confirmed the solution of a practical problem at the one megabit level (Figure 3). 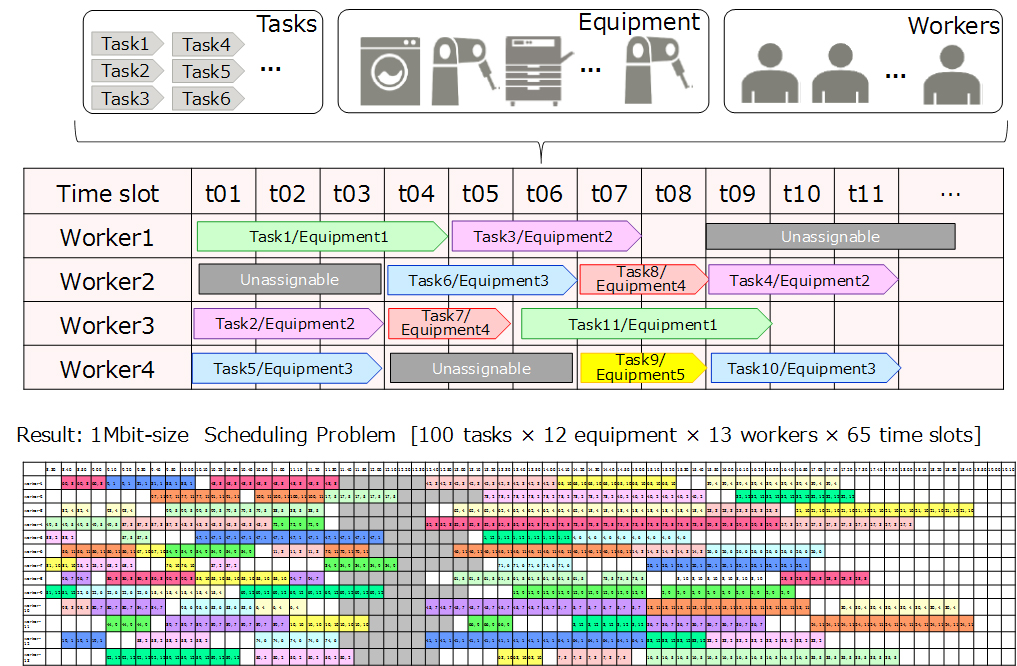 Fujitsu Laboratories will apply the newly developed technology for the Digital Annealer to help solve various large-scale combinatorial optimization problems in the real world, contributing to the streamlining of the development of new drugs, nationwide transportation and delivery plans, strategies for resolving traffic congestion in urban areas, and work shift planning suitable for the new normal era.

[1] Ising Machine:  An ising machine is a machine that solves combinatorial optimization problems represented by an ising model.