Heat engines are devices that utilize waste heat to perform mechanical work and generate power. The invention of heat engines ushered in an era of the industrial revolution two hundred fifty years ago. Among them, the Otto engine, which utilizes distinct heat and work strokes, is used in nearly all automobiles and has been an industry standard due to its relatively high power and efficiency. In an Otto engine, a working substance is typically a gas confined to a piston, which undergoes four subsequent strokes: it is first compressed, then heated up, expanded, and finally cooled down to its initial temperature.

Today, with significant advancements in nano-fabrication, the quantum revolution is upon us, bringing quantum heat engines into the limelight. Like their classical counterparts, quantum heat engines could be operated in various protocols which might be continuous or cyclic. Unlike classical engine which uses a macroscopic amount of the working substance, the working substance of a quantum engine has pronounced quantum features. The most prominent of these is the discreteness of the possible energies it can take. Even more outlandish from the classical point of view is the fact that a quantum system may stay in two or more of its allowed energies at the same time. This property, which has no classical analog, is known as ‘coherence’. Otherwise, a quantum Otto engine is also characterized by four strokes like its classical counterpart.

Determining the quantum Otto engine’s performance metrics, such as power output or efficiency is the key to improving design and tailoring better working substances. A direct diagnosis of such metrics requires measuring the energies of the engine at the beginning and end of each stroke. While a classical engine is only negligibly affected by measurements, in quantum engines the act of the measurement itself causes a bizarre measurement effect in which the engine’s quantum state is severely affected via quantum mechanics. Most importantly, any coherence in the system at the end of the cycle would be completely removed by the measurement effect.

It has long been believed that these strange measurement-induced effects are irrelevant for the understanding of quantum engines and hence have been neglected in traditional quantum thermodynamics. Moreover, not much thought has been put into the design of monitoring protocols that yield a reliable diagnosis of the engine’s performance while minimally altering it.

However, novel breakthrough research performed at the Center for Theoretical Physics of Complex Systems within the Institute for Basic Science, South Korea, may change this rigid perspective. The researchers investigated the impact of different measurement-based diagnostic schemes on the performance of a quantum Otto engine. In addition, they discovered a minimally invasive measurement method that preserves coherence across the cycles.

The researchers utilized the so-called ‘repeated contacts scheme’, where they record the engine’s states using an ancillary probe, and measurements of the probe are performed only at the end of the engine’s working cycles. This bypasses the need to measure the engine repeatedly after each stroke and avoids undesirable measurement-induced quantum effects such as the removal of any coherence that was built up during the cycle.

The preservation of coherence throughout the engine’s lifetime enhanced critical performance metrics like the maximum power output and reliability, making the engine more capable and dependable. According to Prof. Thingna, “this is the first example in which the influence of an experimenter, who wants to know whether the engine does what it is designed to do, has been properly considered.”

Covering a broad spectrum of different modes of operations of engines with a working substance having just two quantum states, the researchers found that only for idealized cycles that perform infinitely slowly it makes no difference which monitoring scheme is applied. But all engines that run in finite time and hence are of practical interest work considerably better for their power output and reliability when they are monitored according to the repeated contact scheme.

Overall, the researchers concluded that the nature of the measurement techniques can bring theory closer to experimental data. Hence, it is vital to take these factors into account when monitoring and testing quantum heat engines. This research was published in the Physical Review X Quantum. 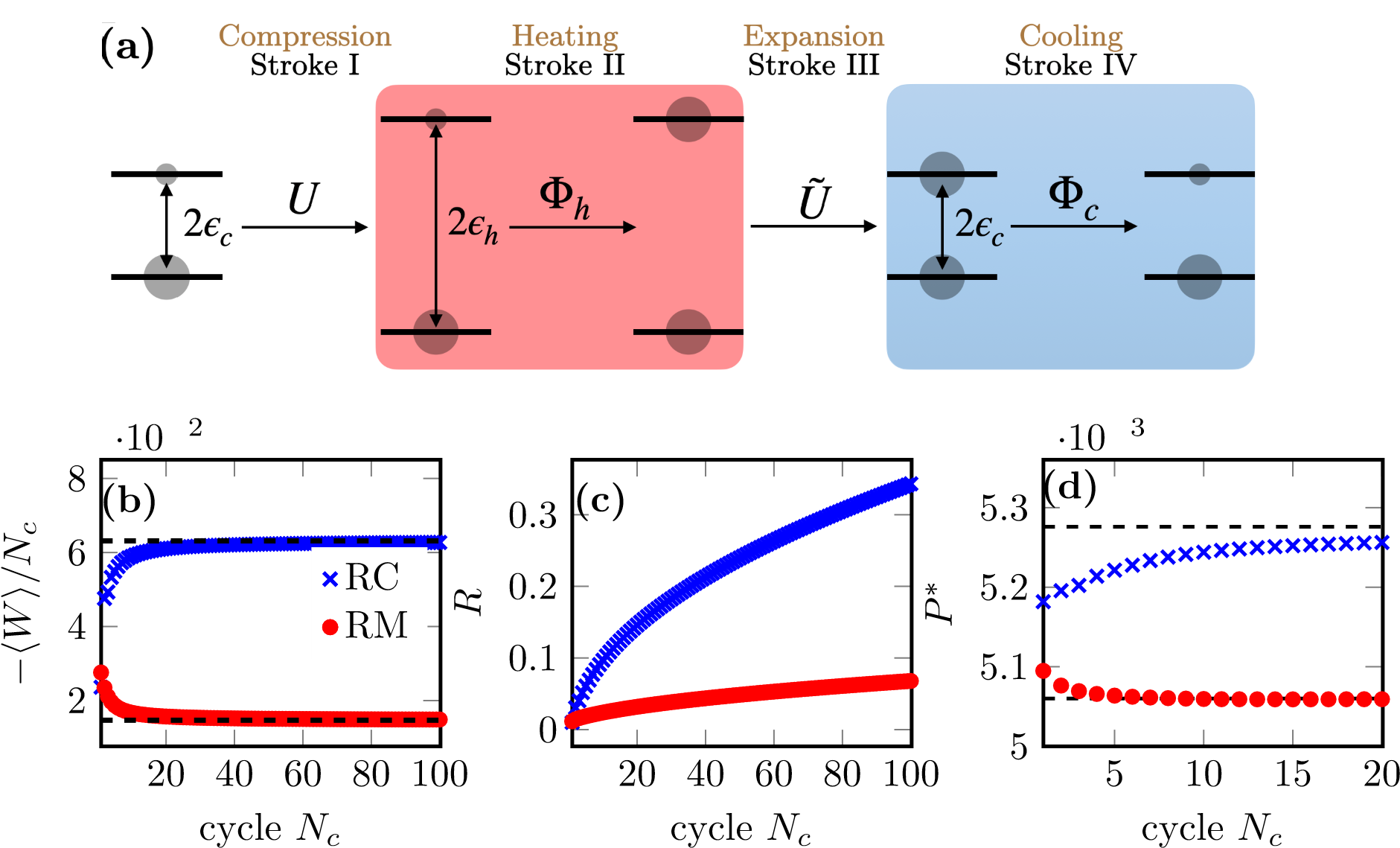 Figure 1.
(a) Schematic of a single cycle (Nc =1) of an Otto cycle undergoing four strokes. The working substance is a qubit undergoing imperfect thermalizing heat (heating and cooling) strokes and finite-time work (compression and expansion) strokes. (b) Work output per cycle of the finite-time quantum Otto engine, (c) Reliability of the engine, and (d) The maximum power output. The engine operates for Nc cycles. In all cases, the repeated contacts (RC, blue crosses) scheme that preserves coherence outperforms the repeated measurements (RM, red filled circles) that kill all coherences.