Quantum Spain is Slated for Operations by End-of-Year 2022 With Two-Qubit Chip, More

Quantum Spain is Slated for Operations by End-of-Year 2022 With Two-Qubit Chip, More

The project includes the construction and commissioning of the first quantum computer in southern Europe, which will be operational by the end of 2022 and will be installed at BSC.

The Quantum Spain program will involve 25 universities and research centres and infrastructures, from 14 autonomous communities, which will collaborate to create a Spanish quantum computing ecosystem.

The Barcelona Supercomputing Center (BSC) has begun coordination work on the Quantum Spain project, which provides for the construction and installation of the first quantum computer based on European technology. The strategic objective of the Quantum Spain project, approved last Tuesday by the Council of Ministers, is to create a solid quantum computing ecosystem in Spain.

Quantum Spain involves 25 universities and infrastructure and supercomputing centres, from 14 autonomous communities and will be managed by BSC, as the main node of the Spanish Supercomputing Network (RES). The coordinator of the project will be the doctor in quantum computing Alba Cervera, researcher at BSC.

The project foresees the construction of a quantum computer that will be installed at BSC headquarters and that will progressively be equipped with chips of different generations and numbers of qubits. The qubit is the basic unit of quantum computing and the Quantum Spain project will use qubits based on superconducting circuit technology. The construction of the hardware will be carried out in collaboration with companies specialized in this emerging sector.

The forecast is that the computer will have a first operational two-qubit chip by the end of 2022 and will progressively incorporate new versions of chips, until reaching 20 qubits in 2025. “The objective of Quantum Spain is not to compete with other quantum computers in number of qubits. We want quality before quantity. This is a realistic project that is committed to having a powerful quantum computer, but not at the cost of sacrificing those quantum properties that make it special. The goal is to have a quality, functional device that is useful and can be used to solve real problems in the near future. We want it to be useful for Spain to develop its own algorithms, to promote its transversal use both for research and for companies and to train future users of this technology. “

The priority: create a quantum ecosystem

The priority of Quantum Spain, framed in the National Strategy for Artificial Intelligence (ENIA), is to establish a solid quantum computing ecosystem in Spain, taking advantage of and promoting the talent of local researchers who are experts in this technology. This objective is based on four pillars: 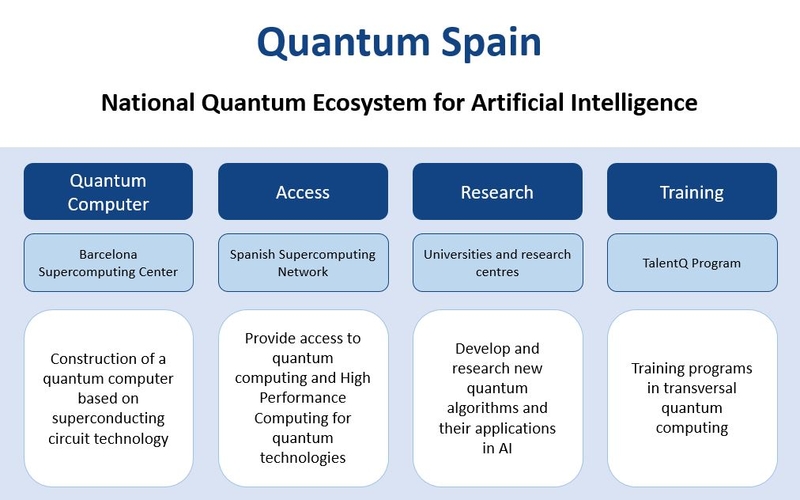 A technology with intense international competition

Quantum computing has potential applications in AI, in quantum chemistry, in finance, in optimization of production chain processes, cryptography, cybersecurity, logistics and in many problems that require intense computational needs. Currently, it is one of the research and development areas on which a more intense international career is being carried out and different countries have already announced plans to obtain computers based on quantum technologies.

One of the peculiarities of Quantum Spain’s commitment is that it does not intend to join this race by buying hardware from third countries and is committed to the development of its own technology, to limit dependence and maintain the maximum possible degree of technological and economic sovereignty.

This program is fully aligned with the European commitment to quantum computing, through the EuroHPC Joint Undertaking alliance, which promotes European capabilities in supercomputing. The objective of the Commission and the countries as a whole is to provide European users of HPC with quantum computers integrated into the large supercomputing centers, such as BSC. This will coincide with the growing demand for this type of computing from industry and the world and will encourage the emergence of real use case applications in Europe.

Another priority of the project is to promote synergies between quantum technologies and artificial intelligence – a field known as “Quantum Machine Learning” -, taking advantage of the characteristics of quantum infrastructures to facilitate the training process of certain deep learning algorithms.

This project, promoted by the Secretary of State for Digitalization and Artificial Intelligence (SEDIA) of the Ministry of Economic Affairs and Digital Transformation, is part of the Recovery, Transformation and Resilience Plan and measure 15 of the National Artificial Intelligence Strategy ( ENIA), thus also advancing in the implementation of the Digital Spain 2025 agenda.

Centers that will facilitate access and support to quantum computer users 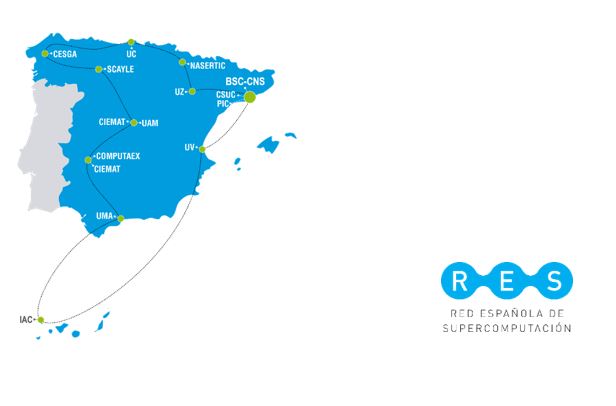 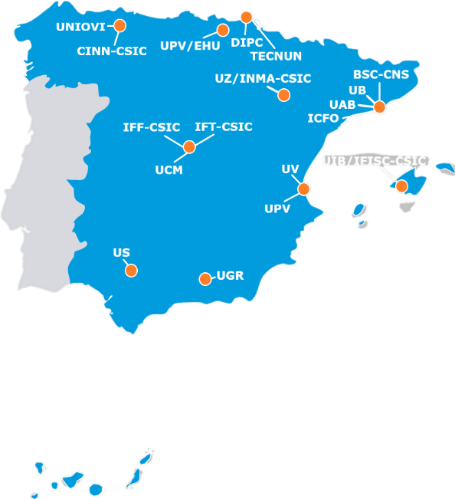 Qrypt’s Quantum Security for Enterprises Through the Cloud: QKD, E-a-a-S With Brexit Comes This: UK Faces Exclusion From Horizon Europe Calls in Quantum

Put a Stamp on It! Quantum Technology Seen as Solution to U.S. Postal Service’s Inefficiency