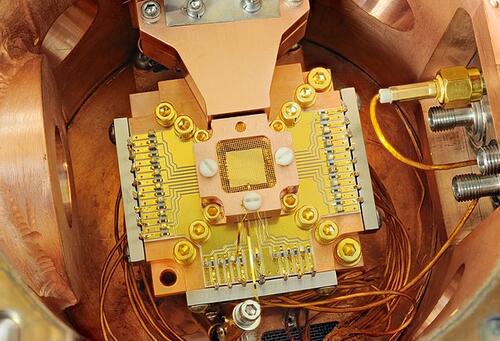 Wright Lab assistant professor David Moore, along with three colleagues from other institutions, recently proposed a novel idea of using trapped electrons and ions—technologies that are being developed as qubits for quantum computation—as ultra-sensitive particle detectors that may be able to enhance the search for the nature of dark matter, neutrinos, new forces, and more.Trapped charged particles, such as ions or electrons, are among the most studied systems for developing quantum computers (in parallel with superconducting qubits, which are under development at the Yale Quantum Institute).

In an “Editor’s suggestion” published in Physical Review Letters (PRL), Moore and collaborators point out that the exquisite sensitivity of these systems can also be used to detect extremely weakly interacting particles, such as dark matter. A key advantage of the proposal would be the ability to detect much smaller energy depositions than traditional charged particle detectors.

Other applications to fundamental physics studied in the paper include possible measurements of charged particles emitted by beta decay, which the Project 8 collaboration (with the Yale effort led by Karsten Heeger, professor of physics and director of Wright Lab) is also developing new techniques to measure in order to better understand the nature of the mysterious neutrino.

These results may also eventually have practical applications to quantum computers, as charged particles emitted by natural radiation could randomly scramble qubits in large arrays. The paper studies how techniques from low background physics used by researchers at Wright Lab might provide a solution to this problem and eventually be used in ion-based quantum computers.

In addition to Moore, the other authors of the paper are Daniel Carney (Lawrence Berkeley National Laboratory), Hartmut Häffner (University of California, Berkeley), and Jacob M. Taylor (Joint Quantum Institute, National Institute of Standards and Technology and Joint Center for Quantum Information and Computer Science, University of Maryland, College Park).

The Shorts | 10/26/21 | Cybersecurity and Cryptography in Quantum Computing