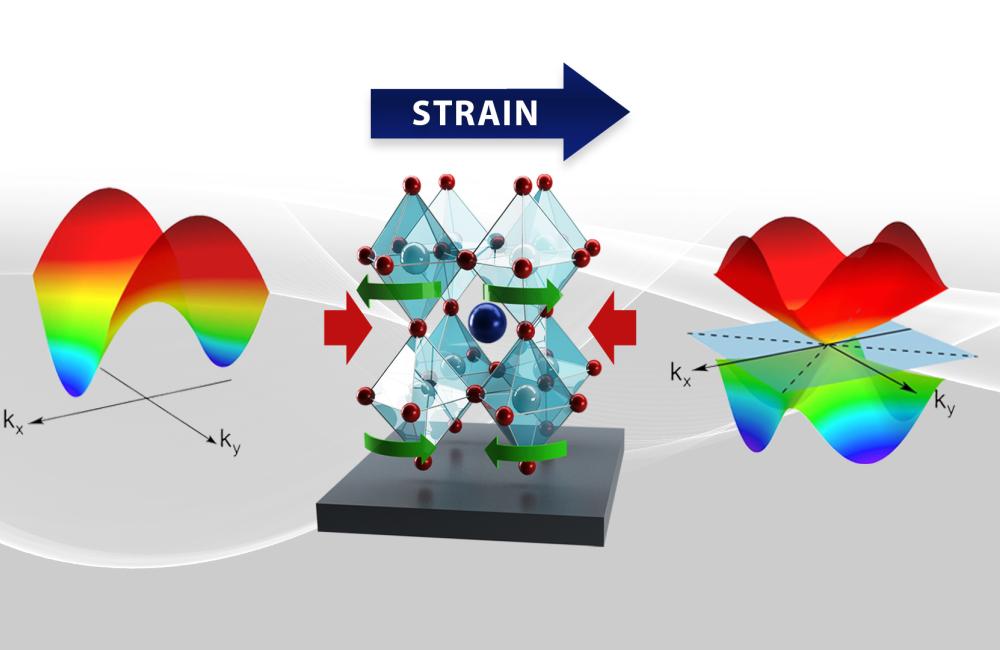 A team led by the Department of Energy’s Oak Ridge National Laboratory has found a rare quantum material in which electrons move in coordinated ways, essentially “dancing.” Straining the material creates an electronic band structure that sets the stage for exotic, more tightly correlated behavior – akin to tangoing – among Dirac electrons, which are especially mobile electric charge carriers that may someday enable faster transistors. The results are published in the journal Science Advances.

“We combined correlation and topology in one system,” said co-principal investigator Jong Mok Ok, who conceived the study with principal investigator Ho Nyung Lee of ORNL. Topology probes properties that are preserved even when a geometric object undergoes deformation, such as when it is stretched or squeezed. “The research could prove indispensable for future information and computing technologies,” added Ok, a former ORNL postdoctoral fellow.

In conventional materials, electrons move predictably (for example, lethargically in insulators or energetically in metals). In quantum materials in which electrons strongly interact with each other, physical forces cause the electrons to behave in unexpected but correlated ways; one electron’s movement forces nearby electrons to respond.

To study this tight tango in topological quantum materials, Ok led the synthesis of an extremely stable crystalline thin film of a transition metal oxide. He and colleagues made the film using pulsed-laser epitaxy and strained it to compress the layers and stabilize a phase that does not exist in the bulk crystal. The scientists were the first to stabilize this phase.

Different states of a quantum mechanical system are called “degenerate” if they have the same energy value upon measurement. Electrons are equally likely to fill each degenerate state. In this case, the special symmetry results in four states occurring in a single energy level.

“Because of the special symmetry, the degeneracy is protected,” Mohanta said. “The Dirac electron dispersion that we found here is new in a material.” He performed calculations with Satoshi Okamoto, who developed a model for discovering how crystal symmetry influences band structure.

“Think of a quantum material under a magnetic field as a 10-story building with residents on each floor,” Ok posited. “Each floor is a defined, quantized energy level. Increasing the field strength is akin to pulling a fire alarm that drives all the residents down to the ground floor to meet at a safe place. In reality, it drives all the Dirac electrons to a ground energy level called the extreme quantum limit.”

Lee added, “Confined here, the electrons crowd together. Their interactions increase dramatically, and their behavior becomes interconnected and complicated.” This correlated electron behavior, a departure from a single-particle picture, sets the stage for unexpected behavior, such as electron entanglement. In entanglement, a state Einstein called “spooky action at a distance,” multiple objects behave as one. It is key to realizing quantum computing.

“Our goal is to understand what will happen when electrons enter the extreme quantum limit, where we find phenomena we still don’t understand,” Lee said. “This is a mysterious area.”
Speedy Dirac electrons hold promise in materials including graphene, topological insulators and certain unconventional superconductors. ORNL’s unique material is a Dirac semimetal, in which electron valence and conduction bands cross and this topology yields surprising behavior. Ok led measurements of the Dirac semimetal’s strong electron correlations.

“We found the highest electron mobility in oxide-based systems,” Ok said. “This is the first oxide-based Dirac material reaching the extreme quantum limit.”

That bodes well for advanced electronics. Theory predicts that it should take about 100,000 tesla (a unit of magnetic measurement) for electrons in conventional semiconductors to reach the extreme quantum limit. The researchers took their strain-engineered topological quantum material to Eun Sang Choi of the National High Magnetic Field Laboratory at the University of Florida to see what it would take to drive electrons to the extreme quantum limit. There, he measured quantum oscillations showing the material would require only 3 tesla to achieve that.

Other specialized facilities allowed the scientists to experimentally confirm the behavior Mohanta predicted. The experiments occurred at low temperatures so that electrons could move around without getting bumped by atomic-lattice vibrations. Jeremy Levy’s group at the University of Pittsburgh and the Pittsburgh Quantum Institute confirmed quantum transport properties. With synchrotron x-ray diffraction, Hua Zhou at the Advanced Photon Source, a DOE Office of Science user facility at Argonne National Laboratory, confirmed that the material’s crystallographic structure stabilized in the thin film phase yielded the unique Dirac band structure. Sangmoon Yoon and Andrew Lupini, both of ORNL, conducted scanning transmission electron microscopy experiments at ORNL that showed that the epitaxially grown thin films had sharp interfaces between layers and that the transport behaviors were intrinsic to strained strontium niobate.

The title of the Science Advances paper is “Correlated Oxide Dirac Semimetal in the Extreme Quantum Limit.”

UT-Battelle manages ORNL for the Department of Energy’s Office of Science, the single largest supporter of basic research in the physical sciences in the United States. The Office of Science is working to address some of the most pressing challenges of our time. For more information, please visit energy.gov/science.

The Shorts | 10/4/21 | Algorithms and Software in Quantum Computing

The Shorts | 10/4/21 | Business and Industry in Quantum Computing