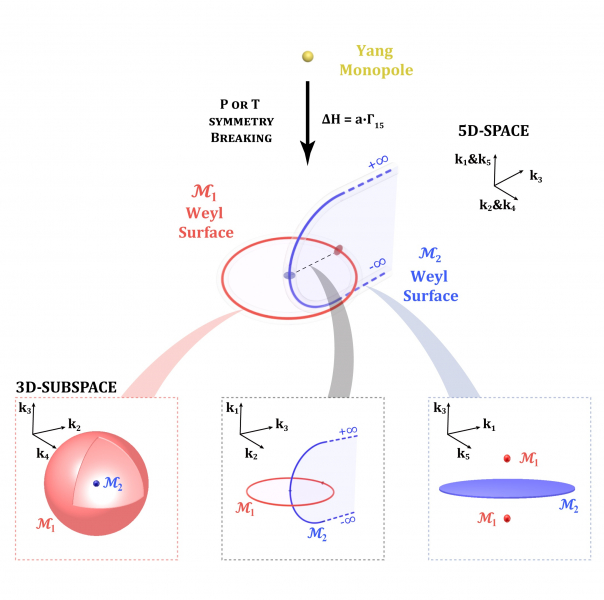 Linked Weyl surfaces, a novel type of topological phase that exists in five-dimensional space, were experimentally observed for the first time by a team led by Professor Shuang ZHANG from the Department of Physics at The University of Hong Kong(HKU). The work provides a unique platform for exploring various topological phases, the transition between them, and the corresponding boundary effects in five dimensions. The research paper was recently published in the renowned journal Science.

Why topology and Weyl surfaces matter?
In geometry, topology concerns the global features of a shape, independent of the details – a famous example being that a coffee mug and a donught-shaped ring (torus) are topologically equivalent because they can be continuously transformed into each other without experiencing dramatic changes, e.g. opening holes, tearing, gluing, etc.

The principle of topology has been successfully applied to physical systems and has led to the discovery of many intriguing phenomena, such as quantum Hall effect and robust one-way surface wave propagation without any backscattering. Topological physics also holds promise for novel devices and applications in both electronics and photonics, e.g large-scale topological quantum computation and topological laser. Among various topological physical systems, Weyl point, a massless state with linear dispersion along with all three directions, has received special attention as it serves as a kind of source of band topology. Weyl particles were first predicted by German physicist Hermann Weyl in 1929, but they have not been found as fundamental particles.

Weyl points were proposed to exist in certain material systems in the form of quasiparticles in recent years, and they were observed experimentally in 2015. Weyl points are the 3D counterparts of the famous Dirac points found in graphene – a two-dimensional system consisting of a single layer of graphite. The extension of Weyl points from 3D to higher dimensions is expected to introduce more complicated and intriguing topological phenomena, e.g. high-dimensional quantum Hall effect. Specifically, its generalisation to five dimensions leads to two possible configurations – Yang monopoles and linked Weyl surfaces. Yang monopoles, first proposed by Professor Chen-Ning YANG in 1978, are isolated points in the 5D momentum space, which serve as sources of non-abelian Berry curvature. Recently there have been demonstrations of Yang monopoles in purely synthetic dimensions. However, until now, there has been no experimental observation of Weyl surfaces, whose linking behaviour serves as a direct signature of the second Chern number.

Observing complicated topological phase through experiment
Together with collaborators from Jilin University, HKUST and Tsinghua University, Zhang’s group designed and realised systems possessing linked Weyl surfaces based on metamaterials – artificially engineered photonic structures that exhibit exotic optical properties, including negative refraction and invisibility cloaks. The authors constructed a 5D physical system by combining the three real momenta and two additional synthetic dimensions provided by an exotic electromagnetic property of metamaterials called bianisotropy. The designed metamaterial consists of a delicate arrangement of metallic helices of different handednesses. By carefully engineering the geometry and orientation of each helix, it is possible to finely tune the structure to realise controllable synthetic momenta. By further adding some perturbations to the system to lower the symmetry of the structure, one can bring the interesting linking properties of the Weyl surfaces to the three-dimensional real momentum space, which can be directly observed in the experiment. Depending on the type of perturbations, the linked Weyl surfaces can be manifested as a point enclosed by a sphere, two points separated by a plane, or linking between two rings in the three-dimensional subspace, as shown in the figure. This linking represents the second Chern number that is not present in their lower dimensional counterparts. The authors further observed the key signature of this unusual topological phase – the presence of a 1D Weyl arc at the 4D boundary of the 5D system.

What are the impacts and what’s next?
This work opens doors to the investigation of various topological phases in higher dimensions. From the perspective of fundamental physics, it provides a unified view of different topological phases in lower dimensions, such as Weyl points, nodal lines, and Dirac points; for device applications, by taking designing parameters as additional synthetic dimensions, it leverages the concept of higher-dimension topology to control the propagation of electromagnetic waves in artificially engineered photonic media, e.g. realising robust integrated photonic circuits for optical information processing that is immune to scattering loss.

“Our work serves as the first experimental observation of the linking of Weyl surfaces and surface Weyl arcs in five-dimensional space,” said Professor Zhang. “Making use of the design flexibility and tunability of metamaterials, it will usher in a new era of higher-dimensional topological phase exploration.”

The journal paper can be accessed with the following link:
https://science.sciencemag.org/content/373/6554/572

Source:  The University of Hong Kong.  Ms. Casey To,  HKU Physicists and collaborators co-observe a higher-dimensional topological state with metamaterials…

The Shorts | 8/30/21 | Business and Industry in Quantum Computing