Physicist Dr Markus Rambach from the ARC Centre of Excellence for Engineered Quantum Systems (EQUS) at The University of Queensland said the team was able to find unknown quantum states more quickly and accurately, using a technique called self-guided tomography.

The team also introduced the ‘quvigint’, which is like a qubit (the quantum version of a classical bit that takes on the values ‘0’ or ‘1’) except that it takes on not two, but 20 possible values.

Caption: Hologram encoding a quvigint (left), such as that photographed during the experiment (right). Image credit: Markus Rambach

Dr Rambach said high-dimensional quantum states such as quvigints are ideal for storing and sending large amounts of information securely.

However, finding unknown states becomes increasingly difficult in higher dimensions, because the same scaling that gives quantum devices their power also limits our ability to describe them.

He said this problem was akin to navigating a high-dimensional quantum treasure map.

“We know where we are, and that there’s treasure, but we don’t know which way to go to get to it,” Dr Rambach said.

“Using standard tomography, this problem would be solved by first determining which directions you need to look in to ensure you cover the whole map, then collecting and storing all the relevant data, and finally processing the data to find the treasure.

“Instead, using self-guided tomography, we pick two directions at random, try them both, pick the one that gets us closer to the treasure based on clues from the machine learning algorithm, and then repeat this until we reach it.

“This technique saves a huge amount of time and energy, meaning we can find the treasure—the unknown quvigint—much more quickly and easily.” 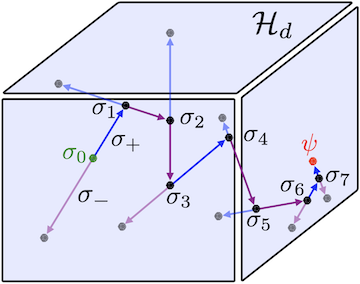 Caption: Navigating a high-dimensional quantum treasure map, starting from the green point and ending at the red point (the treasure!). Image credit: APS(link is external).

To illustrate the technique, the team simulated a quvigint travelling through the atmosphere, as it would when being used to send quantum information between two points on Earth or to a satellite.

As the quvigint travels, it is modified by atmospheric turbulence.

Standard tomography is very susceptible to this type of noise, but by using self-guided tomography the team was able to reconstruct the original quvigint with high accuracy.

Dr Jacq Romero, also at EQUS and UQ, said self-guided tomography is unlike other methods for finding unknown quantum states.

“Self-guided tomography is efficient, accurate, robust to noise and readily scalable to high dimensions, such as quvigints,” Dr Romero said.

“Self-guided tomography is a robust tomography method that is agnostic to the physical system, so it can be applied to other systems such as atoms or ions as well.”

The results are published in Physical Review Letters(link is external).