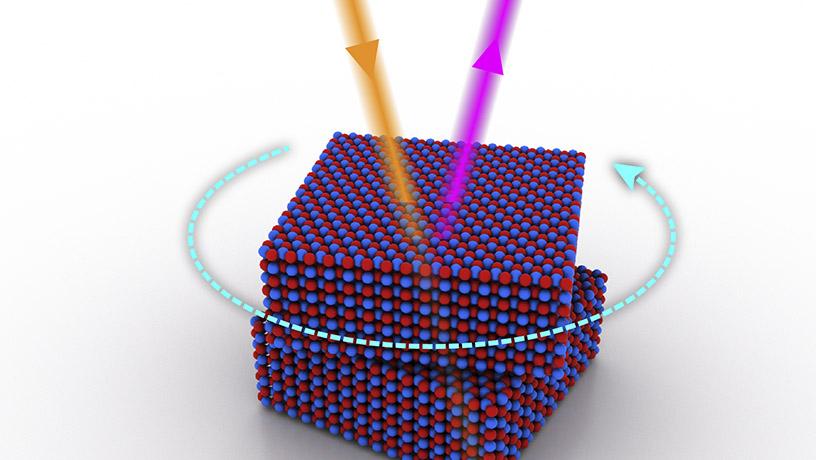 Two slabs of boron nitride crystals are dynamically twisted with respect to each other. At certain angles, the incoming laser light (orange beam) can be efficiently converted to higher energy light (pink beam), as a result of micromechanical symmetry breaking.

Nonlinear optics, a study of how light interacts with matter, is critical to many photonic applications, from the green laser pointers we’re all familiar with to intense broadband (white) light sources for quantum photonics that enable optical quantum computing, super-resolution imaging, optical sensing and ranging, and more. Through nonlinear optics, researchers are discovering new ways to use light, from getting a closer look at ultrafast processes in physics, biology, and chemistry to enhancing communication and navigation, solar energy harvesting, medical testing, and cybersecurity.

Columbia Engineering researchers report that they developed a new, efficient way to modulate and enhance an important type of nonlinear optical process: optical second harmonic generation—where two input photons are combined in the material to produce one photon with twice the energy—from hexagonal boron nitride through micromechanical rotation and multilayer stacking. The study was published online March 3 by Science Advances.

“Our work is the first to exploit the dynamically tunable symmetry of 2D materials for nonlinear optical applications,” said James Schuck, associate professor of mechanical engineering, who led the study along with James Hone, Wang Fong-Jen Professor of Mechanical Engineering.

A hot topic in the field of 2D materials has been exploring how twisting or rotating one layer relative to another can change the electronic properties of the layered system—something that can’t be done in 3D crystals because the atoms are bonded so tightly together in a 3D network. Solving this challenge has led to a new research area termed “twistronics.” In this new study, the team used concepts from twistronics to show that they also apply to optical properties.

“We are calling this new research area ‘twistoptics,’” said Schuck. “Our twistoptics approach demonstrates that we can now achieve giant nonlinear optical responses in very small volumes—just a few atomic layer thicknesses—enabling, for example, entangled photon generation with a much more compact, chip-compatible foot print. Moreover, the response is fully tunable on demand. 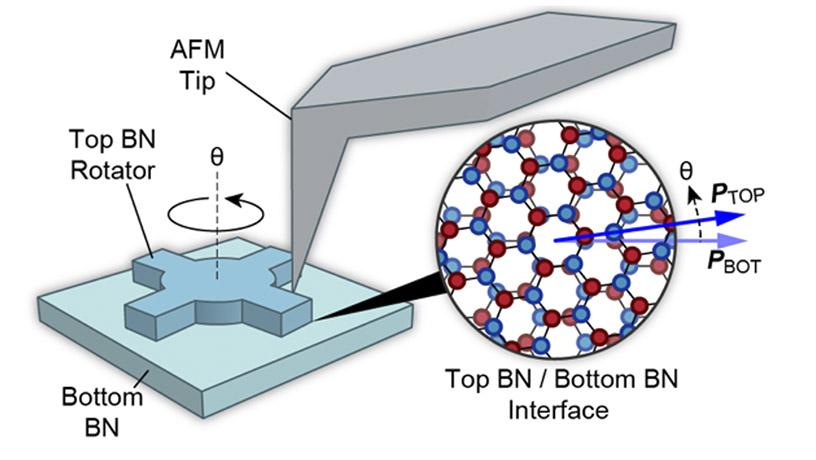 A schematic of the experiment. Boron nitride crystals are etched into micro-rotator shapes and pushed by AFM tips. In this way, symmetry of the interfacial lattice structure (the zoom-in inset) is dynamically tuned, resulting in modulated efficiency of optical frequency conversion.

The group found that van der Waals multilayer crystals provide an alternative solution for engineering optical nonlinearity. Thanks to the extremely weak interlayer force, the researchers could easily manipulate relative crystal orientation between neighboring layers by micromechanical rotation. With the ability to control symmetry at the atomic-layer limit, they demonstrated precise tuning and giant enhancement of optical second harmonic generation with micro-rotator devices and superlattice structures, respectively. For the superlattices, the team first used layer rotation to created “twisted” interfaces between layers that yield an extremely strong nonlinear optical response, and then stacked several of these “twisted” interfaces on top of one another.

“We showed that the nonlinear optical signal actually scales with the square of the number of twisted interfaces,” said Kaiyuan Yao, a postdoctoral research fellow in Schuck’s lab and co-lead author of the paper. “So this makes the already large nonlinear response of a single interface orders of magnitude stronger still.”

The group’s findings have several potential applications. Tunable second harmonic generation from micro-rotators could lead to novel on-chip transducers that couple micromechanical motion to sensitive optical signals by turning mechanical motion into light. This is critical for many sensors and devices such as atomic force microscopes.

Stacking multiple boron nitride thin films on top of each other with controlled twist angle demonstrated greatly enhanced nonlinear response. This could offer a new way to manufacture efficient nonlinear optical crystals with atomic precision. These could be used in a broad range of laser (such as the green laser pointers), optical spectroscopy, imaging, and metrology systems. And perhaps most significantly, they could provide a compact means for generating entangled photons and single photons for next-generation optical quantum information processing and computing.

This work was a collaboration carried out at the Energy Frontier Research Center on Programmable Quantum Materials at Columbia, with theory collaborators at Max Planck Institute for the Structure and Dynamics of Matter. The device fabrication was partially done in the cleanroom of the Columbia Nano Initiative.

“We hope,” Schuck said, “that this demonstration provides a new twist in the ongoing narrative aimed at harnessing and controlling the properties of materials.”