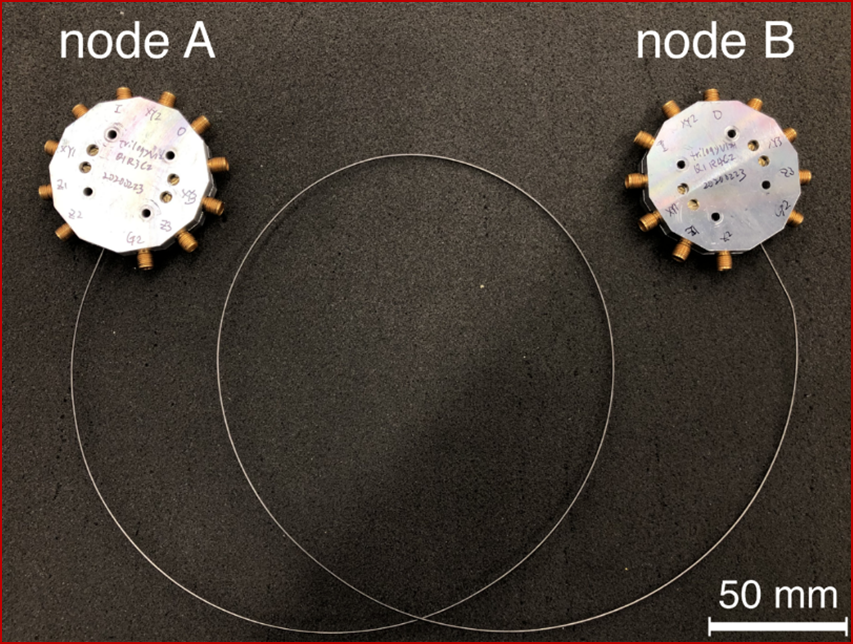 In a breakthrough for quantum computing, University of Chicago researchers have sent entangled qubit states through a communication cable linking one quantum network node to a second node.

The researchers, based in the Pritzker School of Molecular Engineering (PME) at the University of Chicago, also amplified an entangled state via the same cable first by using the cable to entangle two qubits in each of two nodes, then entangling these qubits further with other qubits in the nodes.

The results could help make quantum computing more feasible and could lay the groundwork for future quantum communication networks.

“Developing methods that allow us to transfer entangled states will be essential to scaling quantum computing,” said Prof. Andrew Cleland, who led the research.

Sending entangled photons through a network

Qubits, or quantum bits, are the basic units of quantum information. By exploiting their quantum properties, like superposition, and their ability to be entangled together, scientists and engineers are creating next-generation quantum computers that will be able solve previously unsolvable problems.

To send the entangled states through the communication cable – a one-meter-long superconducting cable – the researchers created an experimental set-up with three superconducting qubits in each of two nodes. They connected one qubit in each node to the cable and then sent quantum states, in the form of microwave photons, through the cable with minimal loss of information. The fragile nature of quantum states makes this process quite challenging.

Cleland’s former postdoctoral fellow, paper first author Youpeng Zhong, was able to develop a system in which the whole transfer process – node to cable to node – takes only a few tens of nanoseconds (a nanosecond is one billionth of a second). That allowed them to send entangled quantum states with very little information loss.

The system also allowed them to “amplify” the entanglement of qubits. The researchers used one qubit in each node and entangled them together by essentially sending a half-photon through the cable. They then extended this entanglement to the other qubits in each node. When they were finished, all six qubits in two nodes were entangled in a single globally entangled state.

In the future, quantum computers will likely be built out of modules where families of entangled qubits conduct a computation. These computers could ultimately be built from many such networked modules, similar to how supercomputers today conduct parallel computing on many central processing units connected to one another. The ability to remotely entangle qubits in different modules, or nodes, is a significant advance to enabling such modular approaches.

“These modules will need to send complex quantum states to each other, and this is a big step toward that,” Cleland said. A quantum communication network could also potentially take advantage of this advance.

Cleland and his group hope to next extend their system to three nodes to build three-way entanglement.

“We want to show that superconducting qubits have a viable role going forward,” he said.

Fujitsu & U. of Toronto Develop Quantum-Inspired Technology to Optimize Radiation Treatment Plans for Cancer and Other Diseases