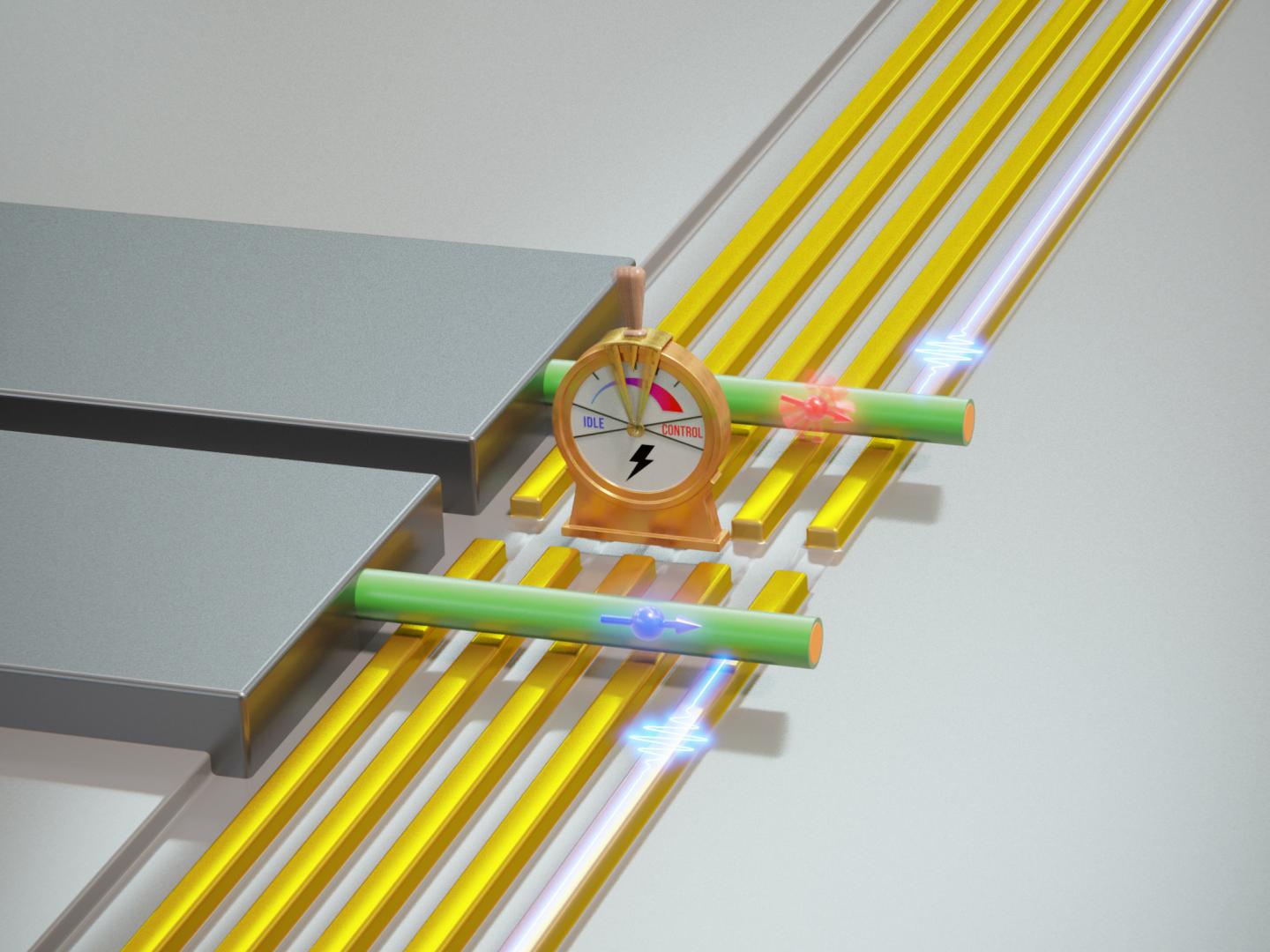 IMAGE: A nanowire made of germanium and silicon (blue/green) lies on electrodes known as gates (gold). Voltages applied to the gates lead to the formation of individual spin qubits (blue and… view more…)  Credit: Image: University of Basel, Department of Physics

To perform calculations, quantum computers need qubits to act as elementary building blocks that process and store information. Now, physicists have produced a new type of qubit that can be switched from a stable idle mode to a fast calculation mode. The concept would also allow a large number of qubits to be combined into a powerful quantum computer, as researchers from the University of Basel and TU Eindhoven have reported in the journal Nature Nanotechnology.

Compared with conventional bits, quantum bits (qubits) are much more fragile and can lose their information content very quickly. The challenge for quantum computing is therefore to keep the sensitive qubits stable over a prolonged period of time, while at the same time finding ways to perform rapid quantum operations. Now, physicists from the University of Basel and TU Eindhoven have developed a switchable qubit that should allow quantum computers to do both.

The new type of qubit has a stable but slow state that is suitable for storing quantum information. However, the researchers were also able to switch the qubit into a much faster but less stable manipulation mode by applying an electrical voltage. In this state, the qubits can be used to process information quickly.

In their experiment, the researchers created the qubits in the form of “hole spins”. These are formed when an electron is deliberately removed from a semiconductor, and the resulting hole has a spin that can adopt two states, up and down – analogous to the values 0 and 1 in classical bits. In the new type of qubit, these spins can be selectively coupled – via a photon, for example – to other spins by tuning their resonant frequencies.

This capability is vital, since the construction of a powerful quantum computer requires the ability to selectively control and interconnect many individual qubits. Scalability is particularly necessary to reduce the error rate in quantum calculations.

The researchers were also able to use the electrical switch to manipulate the spin qubits at record speed. “The spin can be coherently flipped from up to down in as little as a nanosecond,” says project leader Professor Dominik Zumbühl from the Department of Physics at the University of Basel. “That would allow up to a billion switches per second. Spin qubit technology is therefore already approaching the clock speeds of today’s conventional computers.”

For their experiments, the researchers used a semiconductor nanowire made of silicon and germanium. Produced at TU Eindhoven, the wire has a tiny diameter of about 20 nanometers. As the qubit is therefore also extremely small, it should in principle be possible to incorporate millions or even billions of these qubits onto a chip.