Quantum Mysteries: Probing an Unusual State in the Superconductor-Insulator Transition

Scientists at Tokyo Institute of Technology approach the two decade-old mystery of why an anomalous metallic state appears in the superconductor-insulator transition in 2D superconductors. Through experimental measurements of a thermoelectric effect, they found that the “quantum liquid state” of quantum vortices causes the anomalous metallic state. The results clarify the nature of the transition and could help in the design of superconducting devices for quantum computers. 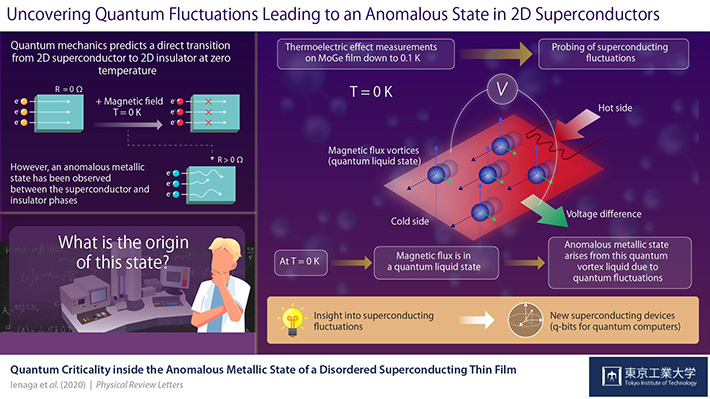 The superconducting state, in which current flows with zero electrical resistance, has fascinated physicists since its discovery in 1911. It has been extensively studied not only because of its potential applications but also to gain a better understanding of quantum phenomena. Though scientists know much more about this peculiar state now than in the 20th century, there seems to be no end to the mysteries that superconductors hold.

A famous, technologically relevant example is the superconductor–insulator transition (SIT) in two-dimensional (2D) materials. If one cools down thin films of certain materials to near absolute-zero temperature and applies an external magnetic field, the effects of thermal fluctuations are suppressed enough so that purely quantum phenomena (such as superconductivity) dominate macroscopically. Although quantum mechanics predicts that the SIT is a direct transition from one state to the other, multiple experiments have shown the existence of an anomalous metallic state intervening between both phases.

So far, the origin of this mysterious intermediate state has eluded scientists for over two decades. That’s why a team of scientists from the Department of Physics at Tokyo Institute of Technology(Tokyo Tech), Japan, recently set out to find an answer to the question in a study published in Physical Review Letters. Assistant Professor Koichiro Ienaga, who led the study, explains their motivation, “There are theories that try to explain the origin of dissipative resistance at zero temperature in 2D superconductors, but no definitive experimental demonstrations using resistance measurements have been made to unambiguously clarify why the SIT differs from the expected quantum phase transition models.”

The scientists employed an amorphous molybdenum–germanium (MoGe) thin film cooled down to an extremely low temperature of 0.1 K and applied an external magnetic field. They measured a traverse thermoelectric effect through the film called the “Nernst effect,” which can sensitively and selectively probe superconducting fluctuations caused by mobile magnetic flux. The results revealed something important about the nature of the anomalous metallic state: the “quantum liquid state” of quantum vortices causes the anomalous metallic state. The quantum liquid state is the peculiar state where the particles are not frozen even at zero temperature because of the quantum fluctuations.

Most importantly, the experiments uncovered that the anomalous metallic state emerges from quantum criticality; the peculiar broadened quantum critical region at zero temperature corresponds to the anomalous metallic state. This is in a sharp contrast to the quantum critical “point” at zero temperature in the ordinary SIT. Phase transitions mediated by purely quantum fluctuations (quantum critical points) have been long-standing puzzles in physics, and this study puts us one step closer to understanding the SIT for 2D superconductors. Excited about the overall results, Ienaga remarks, “Detecting superconducting fluctuations with precision in a purely quantum regime, as we have done in this study, opens a new way to next-generation superconducting devices, including q-bits for quantum computers.”

Now that this study has shed light on the two-decade old SIT mystery, further research will be required to get a more precise understanding of the contributions of the quantum vortices in the anomalous metallic state. Let us hope that the immense power of superconductivity will soon be at hand!