U. Chicago & Northwestern U. Scientists Create Methodology to Tailor Qubits

U. Chicago & Northwestern U. Scientists Create Methodology to Tailor Qubits

Qubits (short for quantum bits) are often made of the same semiconducting materials as our everyday electronics. But an interdisciplinary team of physicists and chemists at the University of Chicago and Northwestern University has developed a new method to create tailor-made qubits: by chemically synthesizing molecules that encode quantum information into their magnetic, or “spin,” states.

This new bottom-up approach could ultimately lead to quantum systems that have extraordinary flexibility and control, helping pave the way for next-generation quantum technology.

“This is a proof-of-concept of a powerful and scalable quantum technology,” said David Awschalom, the Liew Family Professor in Molecular Engineering at University of Chicago’s Pritzker School of Molecular Engineering who led the research along with his colleague Danna Freedman, Professor of Chemistry at Northwestern University. “We can harness the techniques of molecular design to create new atomic-scale systems for quantum information science. Bringing these two communities together will broaden interest and has the potential to enhance quantum sensing and computation.”

The results were published Nov. 12 in the journal Science.

Qubits work by harnessing a phenomenon called superposition. While the classical bits used by conventional computers measure either 1 or 0, a qubit can be both 1 and 0 at the same time. 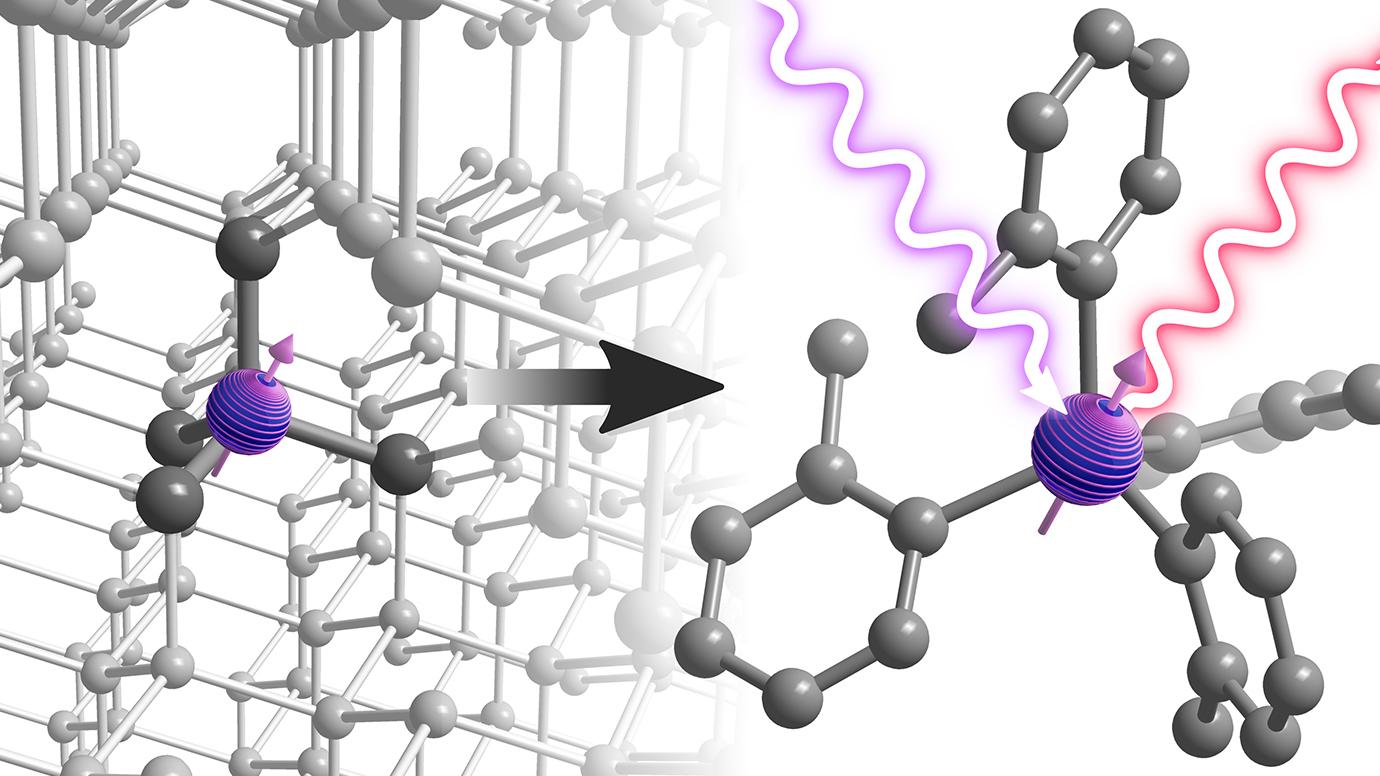 The team wanted to find a new bottom-up approach to develop molecules whose spin states can be used as qubits, and can be readily interfaced with the outside world. To do so, they used organometallic chromium molecules to create a spin state that they could control with light and microwaves.

By exciting the molecules with precisely controlled laser pulses and measuring the light emitted, they could “read” the molecules’ spin state after being placed in a superposition—a key requirement for using them in quantum technologies.

By varying just a few different atoms on these molecules through synthetic chemistry, they were also able to modify both their optical and magnetic properties, highlighting the promise for tailor-made molecular qubits.

“Over the last few decades, optically addressable spins in semiconductors have been shown to be extremely powerful for applications including quantum-enhanced sensing,” said Awschalom, who is also director of the Chicago Quantum Exchange and director of Q-NEXT, a Department of Energy National Quantum Information Science Research Center led by Argonne National Laboratory. “Translating the physics of these systems into a molecular architecture opens a powerful toolbox of synthetic chemistry to enable novel functionality that we are only just beginning to explore.”

“Our results open up a new area of synthetic chemistry. We demonstrated that synthetic control of symmetry and bonding creates qubits that can be addressed in the same way as defects in semiconductors,” Freedman said. “Our bottom-up approach enables both functionalization of individual units as ‘designer qubits’ for target applications and the creation of arrays of readily controllable quantum states, offering the possibility of scalable quantum systems.”

“This is a proof-of-concept of a powerful and scalable quantum technology.”

One potential application for these molecules could be quantum sensors that are designed to target specific molecules. Such sensors could find specific cells within the body, detect when food spoils, or even spot dangerous chemicals.

“Some of the challenges facing quantum technologies might be able to be overcome with this very different bottom-up approach,” said Sam Bayliss, a postdoctoral scholar in the Awschalom Group at University of Chicago’s Pritzker School of Molecular Engineering and co first author on the paper. “Using molecular systems in light-emitting diodes was a transformative shift; perhaps something similar could happen with molecular qubits.”

Daniel Laorenza, a graduate student at Northwestern University and co-first author, sees tremendous potential for chemical innovation in this space. “This chemically specific control over the environment around the qubit provides a valuable feature to integrate optically addressable molecular qubits into a wide range of environments,” he said.

Other authors on the paper include UChicago graduate students Peter Mintun and Berk Diler Kovos.

For Quantum Communication to Come to Fruition, Electronic Components Must be Implemented in a Few Circuits