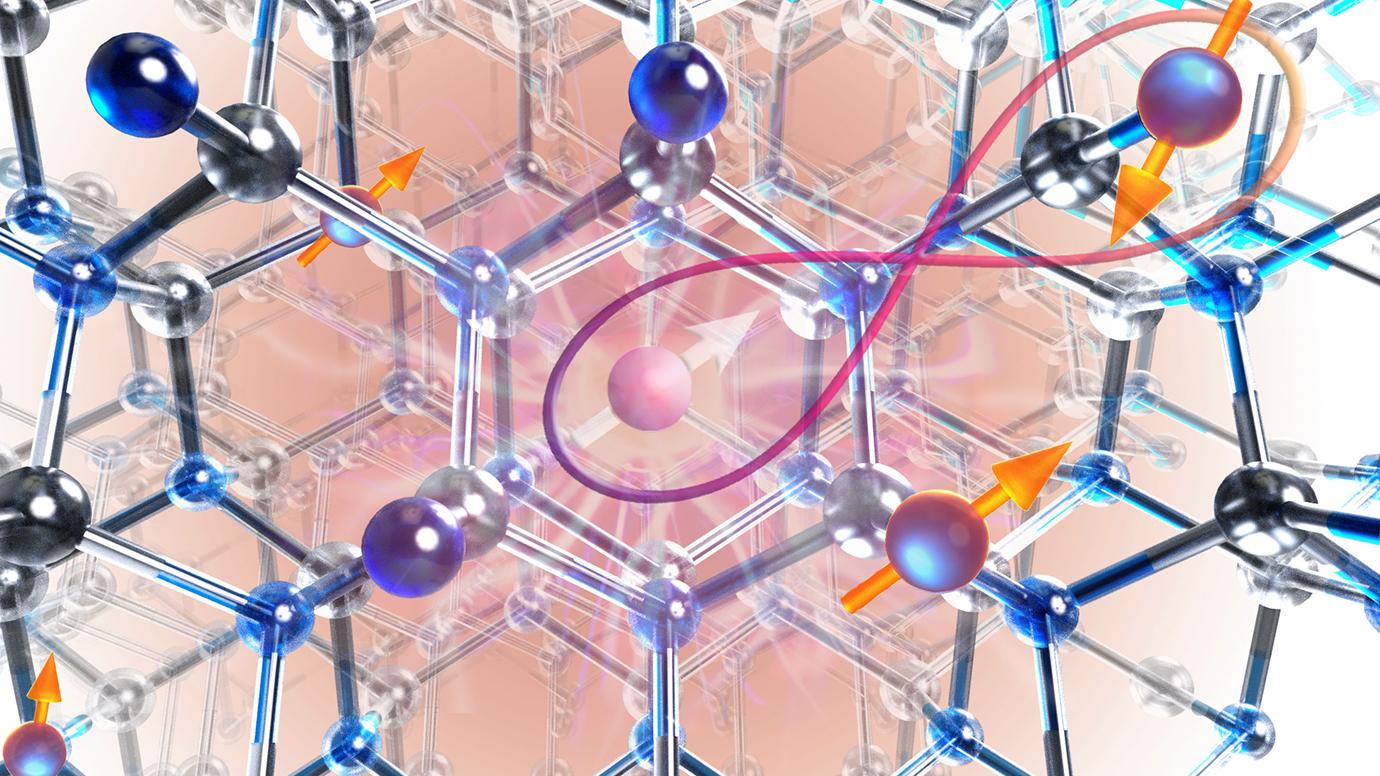 Breakthrough holds major implications for the future of the quantum internet

Quantum technologies have the potential to help create next-generation computers, sensors and communication networks—but doing so requires building a scalable platform in which quantum bits (“qubits”) can be controlled individually and retain information for a long time.

In a new study, scientists at the University of Chicago managed to do exactly that. The team demonstrated control of atomic quantum memories in silicon carbide, a common material found in electric cars and LED light bulbs. Then, they used this control to create an “entangled state,” representing a connection between the quantum memories and electrons trapped in the semiconductor material.

Published Sept. 21 in Nature Materials, the study effectively shows how one could encode and write quantum information onto the core of a single atom, unlocking the potential for building qubits that can remain operational—or “coherent”—for extremely long times. The study results hold major implications for quantum computing, according to the authors.

“Just like a desktop computer has different types of memory for various purposes, we envision quantum technologies will have similar needs,” said co-first author Alexandre Bourassa, a graduate student at the Pritzker School of Molecular Engineering at the University of Chicago. “Our trapped electron is like a CPU, where different nuclear spins can effectively be used as a quantum RAM and hard-drive to provide both medium- and long-term storage of quantum information.” 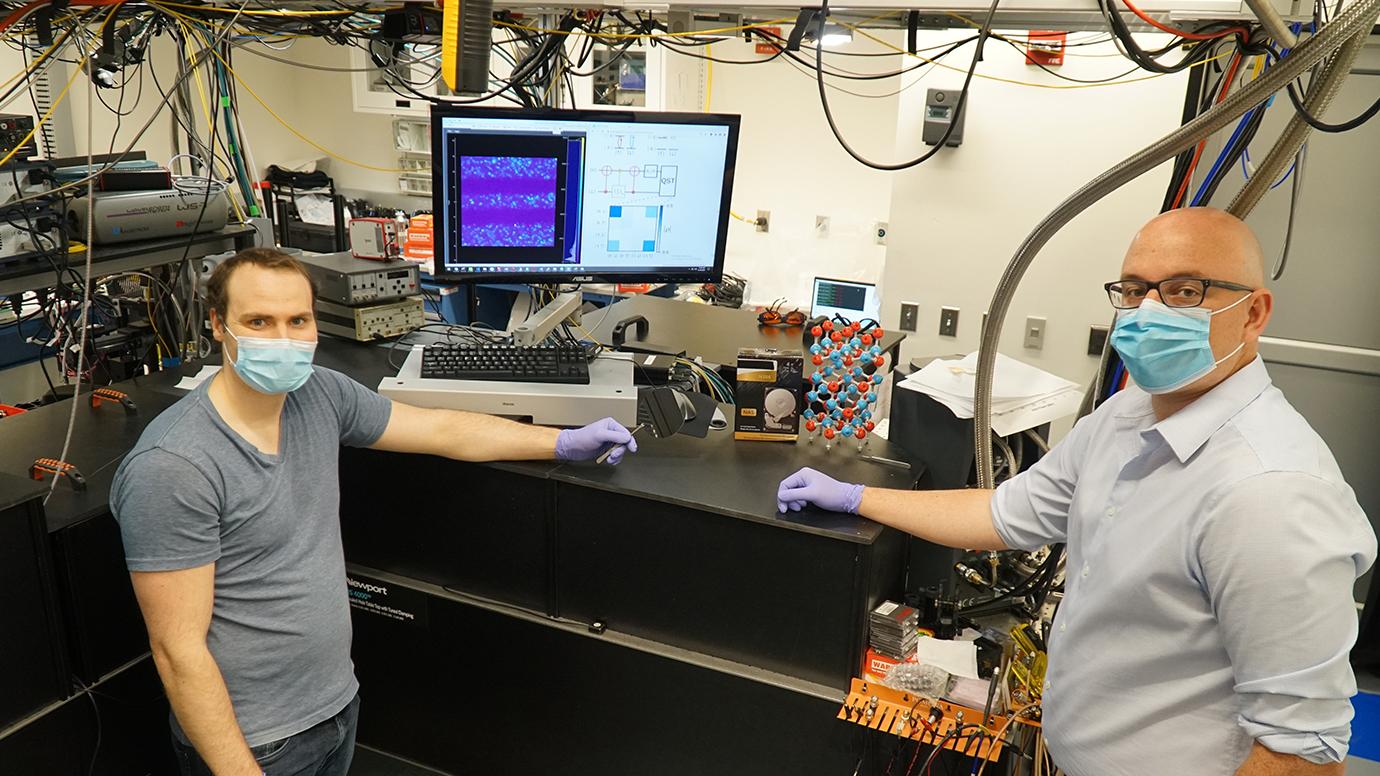 Researchers Alexandre Bourassa (left) and Chris Anderson (right) next to their quantum measurement instrumentation at the University of Chicago Pritzker School for Molecular Engineering.  Photo by Cyrus Zeledon

Semiconductor materials are arrangements of atomic nuclei held together by electronic bonds. Some but not all of these nuclei possess a property called “spin,” which enables them to behave as tiny quantum magnets. Nuclei that do have spin can be used to encode quantum information.

“The spins of atomic nuclei are one of the most robust quantum systems we know of,” said co-first author Chris Anderson, a UChicago postdoctoral scholar. “Their quantum state can last for hours or even days. This makes them ideal for building quantum memories. In a world where most quantum technologies can only retain their information for a fraction of a second, this is an eternity.”

To interact with these nuclei, the scientists used techniques similar to those used in magnetic resonance imaging (MRI), but replaced the bulky magnetic chamber with just a single electron. Using this “atomic scale MRI,” the scientists were able to address and control the nuclei that form the core of individual atoms.

“The trick is to precisely control the number of nuclei carrying the desired spin. If there are too few, one will not have enough available memories in the device, but if there are too many, it won’t be possible to isolate and control them independently,” said graduate student Nikita Onizhuk, a co-author who developed a theoretical model to interpret and guide the experimental breakthroughs.

“Integrating theory, computation and experiments has been critical to optimize these quantum memories,” said Giulia Galli, the Liew Family Professor of Electronic Structure and Simulations at the University of Chicago and a senior scientist at Argonne National Laboratory. Working with theory and materials growth collaborators, the team showed that it’s possible to optimize these quantum memories.

“We believe that we can develop materials that have tens of high-quality quantum memories within a smaller footprint than a single state-of-the-art transistor you’d find in today’s integrated circuits,” said David Awschalom, the Liew Family Professor in Spintronics and Quantum Information in the Pritzker School of Molecular Engineering. Awschalom is also a senior scientist at Argonne, the director of the Chicago Quantum Exchange, and the director of Q-NEXT, a Department of Energy National Quantum Information Science Research Center led by Argonne National Laboratory.

Awschalom added that this work establishes the key components necessary for creating quantum technologies in semiconductor devices and will be an important platform for a future quantum internet.