In the Computational Chemistry, Materials, and Climate (CCMC) Group at Lawrence Berkeley National Laboratory (Berkeley Lab), the future of quantum information science is being driven in part by a group of women scientists who see that future — and theirs along with it — as quite bright. Early in their careers and coming from a variety of academic fields, these women comprise more than half of the postdoctoral researchers in the group, a rarity in computing science. But if they have their way, gender parity in their field won’t be an oddity much longer.

Quantum information science is an emerging field with the goal of using quantum mechanics — the physical properties of nature at the atomic and subatomic scale — to solve complex computing problems. This gives it a potential edge over classical computing in time and efficiency; any problem that can be solved by a quantum computer can also, in theory, be solved by a classical computer, but not necessarily in a useful period of time.

Studying the most basic underpinnings of the universe and harnessing them for computing purposes is a compelling challenge for more than one member of the CCMC. “I get really excited about understanding how, if you have one qubit, one quantum object, that’s difficult, but understandable — but when you have many quantum objects, it gets more difficult to understand how they work,” said theoretical quantum physicist Mekena Metcalf, who joined the CCMC — part of the Lab’s Computational Research Division (CRD) — as a postdoc in 2018. “Where we are with quantum computing right now, especially as theorists and computer scientists, is that we have access to quantum computers in the cloud, so we can actually run real experiments from our laptops. So you’re trying to get an algorithm to work, but you’re also running physics experiments.” 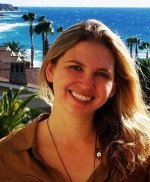 Quantum computational scientist Lindsay Bassman, another CCMC postdoc, agreed. “I always liked quantum because everything is made up of quantum particles, so no matter how you look at it, all the laws of the universe have to be based on what’s going on at that smallest level,” she said. “I like the idea of learning the fundamental laws of nature, and I believe those have to start at the quantum level. Quantum computing is cool because it allows us to simulate quantum systems — extremely small systems that are really difficult to simulate in the lab — in real experiments. It provides a neat tool to try to learn more about these quantum particles….It’s the root of all sciences, really. Any higher-level science you want to attack, light can be shed on it by understanding quantum.”

One of the current challenges in quantum computing is advancing the field from theory to the real world with hardware and algorithms that take advantage of the properties of quantum mechanics. Toward this end, Metcalf, Bassman, and their colleagues Katie Klymko and Anastasiia Butko are involved in a number of quantum projects at Berkeley Lab, including developing quantum algorithms for simulating new materials, optimally controlling transducers to connect quantum computers, working on the Advanced Quantum Testbed (AQT), studying open quantum systems that interact with the macroscopic environment, and designing interfaces to make quantum computers easier to use. In addition, Mariam Kiran

from the Energy Sciences Network (ESnet) division at Berkeley Lab is also involved in the transducers project.

Katie Klymko is a Postdoctoral Scholar at LBNL.

One upside of working on a technology as new as quantum computing is the variety of backgrounds researchers may bring with them and the opportunity to work as part of an interdisciplinary team, learn as they go, and approach the challenges from numerous perspectives. This group of researchers come from classical computer science, chemistry, computer architecture, and laser science, among other fields. “We’re learning along the way and everyone has something to contribute — it’s the intersection of a lot of different areas of expertise,” said Klymko. “I think especially at Berkeley Lab, on the team they’ve built, that’s really recognized — that you need a lot of different areas of expertise.”

With this approach of bringing together scientists from different fields comes plenty of on-the-job problem-solving, and several researchers described a steep learning curve as part of the challenge and excitement of working in such a new field. “I think the most important part is not to be afraid of the unknown,” said Butko, a computer architect in CRD’s Computer Architecture Group, about making the transition to quantum information science. “If you don’t understand at the beginning or can’t see the whole picture, it shouldn’t scare you. That’s absolutely normal — you need time to learn, and there’s no timeline for that. You have to be confident that it will come.”

As the women of the CCMC push the boundaries of quantum computing, they’re also paving the way for the next generation, mentoring up-and-coming scientists of all genders. CCMC scientists are working with undergraduate researchers from the University of California, Berkeley, and other universities on computing science projects and forging the relationships younger researchers will need as they progress in their careers. It’s just one way they’re changing what the future of computing science looks like.

“That’s one of the really cool things about maturing as a scientist — I remember being on that side, trying to find mentors, trying to get advice from all sorts of people,” said Metcalf. “I made a point of reaching out and networking, and I had the opportunity to talk to a lot of women leaders and got really good advice from them going forward. And now it’s my turn.”

ESnet is a U.S. Department of Energy user facility.

Funding: Academy of Finland Call for Research Into Use of Quantum Computers