Minister President Söder and the Presidents of the Bavarian Academy of Sciences and Humanities, Fraunhofer-Gesellschaft, the Ludwig Maximilian University, the MPG, and TUM sign declaration of intent 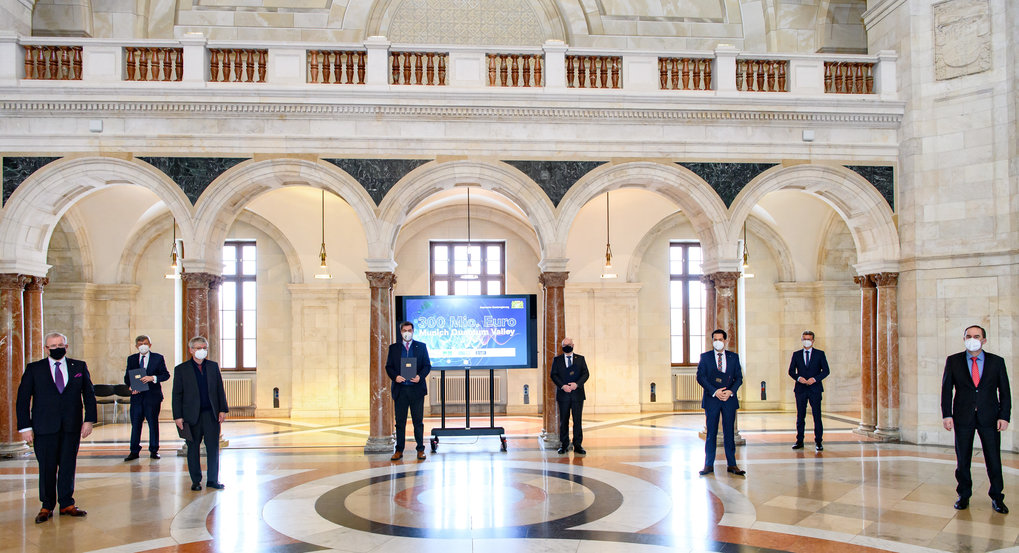 With Munich Quantum Valley as the central element of the Bavarian quantum initiative, the partner organizations aim to advance the development of quantum science and technology at both the national and international level over the next 10 years. Subject to the approval of the Landtag, the Free State of Bavaria will provide €300 million for this endeavour; €120 million of this will be released in 2021 and 2022. Munich Quantum Valley will also apply for funding from the federal government, which is supporting the development of quantum technologies with €2 billion as part of the stimulus package for the future.

A three-point plan for research, development, and education and training

The Bavarian Academy of Sciences and Humanities, the Fraunhofer-Gesellschaft, the Ludwig Maximilian University of Munich, the Max-Planck-Gesellschaft and the Technical University of Munich have formulated a three-point plan to intensify research, development, and education and training in quantum science and technology. For example, they will establish a Centre for Quantum Computing and Quantum Technologies (ZQQ) as well as a quantum technology park and increasingly train and educate junior scientists as well as specialists from industry.

In the ZQQ, industry and science will prioritize research and development in quantum science and technology and coordinate funding for outstanding projects in this area. Scientists at Bavarian research locations outside of Munich could thus be funded for work on quantum simulators in the search for new materials, methods of quantum metrology for particularly precise measurements of electric or magnetic fields, or for methods of tap-proof quantum cryptography – to name just a few examples. The ZQQ is also preparing to construct a quantum computer for calculations that are not possible with conventional supercomputers. In the longer term, commercially usable quantum computers will be developed on this basis; the computing capacities of these will then be made available via cloud access. Software for quantum computers and interfaces to conventional computers are also being designed at the ZQQ.

In the Quantum Technology Park, the Quantum Valley partners will create the high-tech infrastructure that research facilities, start-ups and established technology companies need in order to advance quantum science and technology at an internationally competitive level. Well-equipped clean rooms with facilities for nano- and thin-film production as well as corresponding development and test laboratories will be set up in the technology park. In these facilities, researchers could, for example, rent laboratory space from start-up companies and award service contracts to the infrastructure operators. This will create the ideal conditions for turning research results into innovative products – an area in which other countries (e.g. the US) are well ahead of Europe.

However, Munich Quantum Valley can succeed only with excellently trained scientists and appropriately qualified specialists from industry. With its universities and non-university institutions, Munich and Bavaria are among the world’s leading locations for the education and training of the next generation in quantum science and technology. These activities will be further strengthened in the third pillar of Quantum Valley. The focus will be on training in the handling of intellectual property, quantum technology modules for combined training in technology and management, programmes for company founders and the further training of industry professionals. Munich Quantum Valley will create optimal research conditions and thus make the region even more attractive for top professionals in quantum science and technology.

Reimund Neugebauer, President of the Fraunhofer-Gesellschaft:
“The technological leadership in quantum technologies and quantum computing forms a crucial pillar for the technological independence and resilience of Germany and Europe. With the initiative for Munich Quantum Valley, the Bavarian state government is creating excellent conditions for a hub at the interface of basic and application-oriented research with international appeal. The Fraunhofer-Gesellschaft intends to make a comprehensive contribution to empowering science and industry: at the software level, via the Bavarian Competence Centre for Quantum Security and Data Science together with several Fraunhofer Institutes – the AISEC, IKS, and IIS – as well as via access to the quantum computer we are setting up in Germany together with IBM. At the hardware level, the Fraunhofer-Gesellschaft will assume responsibility for the engineering, manufacturing and system integration of system-critical components. The EMFT provides access to the entire technological spectrum of the Forschungsfabrik Mikroelektronik Deutschland (FMD) research factory”.
www.fraunhofer.de

Bernd Huber, President of the Ludwig Maximilian University:
“We very much welcome this initiative. Munich is one of the world’s most important centres in the field of quantum science and the LMU is one of its driving forces. Our joint Cluster of Excellence ‘Munich Centre for Quantum Science and Technology’ brings together highly respected researchers at the Munich location. With the new Munich Quantum Valley, quantum science will make even more significant progress”.
www.lmu.de

Dr Martin Stratmann, President of the Max-Planck-Gesellschaft:
“Quantum science and technology create completely new possibilities in information processing and communication as well as the development of new materials for the energy transition. The developments in this field are therefore prime examples of ‘leap innovation’. They are also examples of how such epochal innovations are made possible through knowledge-driven basic research. For example, scientists at the Max Planck Institutes of Quantum Optics in Garching and for the Science of Light in Erlangen, among others, have created the physical basis for quantum technologies with their pioneering work”.
www.mpg.de

Thomas F. Hofmann, President of the Technical University of Munich:
“Quantum Valley Munich builds on the outstanding achievements of Munich as the cradle of German quantum research. In line with our ONE MUNICH strategy, it bundles our diverse strengths across institutional boundaries. Together, we are creating an ecosystem for quantum technologies that can compete with the best in the world and attract international scientific talent to Bavaria”.
www.tum.de